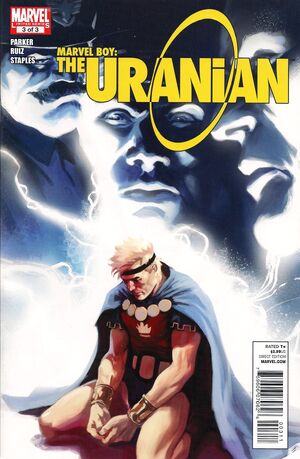 Forgive my insolence to the council but...you don't care about my homeworld, and they're not the backwards primitives in need of Uranian guidance that you believe. You've never made it clear why the colony has been apart from Earth for so long, but I think I get it. They're coming together as a civilization in their own time, in their own way. Whoever left you out on a ball of ice and gas at the outer end of the solar system had a reason. And before I build a bridge between the world...I'm going to know that reason.

Appearing in "Man of Two Worlds"Edit

The times are changing, and they've finally caught up to Marvel Boy with bizarre menaces and strange threats to match his power! A mysterious figure with an agenda has also caught up to Bob Grayson. Surrounded by manipulators, how can the Uranian finally become the hero he was born to be? Jeff Parker, writer of the acclaimed series AGENTS OF ATLAS, reveals the untold tale of other-worldly mental marvel! Plus, re-presenting classic Atlas-era tales of the space-boy’s adventures!

Retrieved from "https://heykidscomics.fandom.com/wiki/Marvel_Boy:_The_Uranian_Vol_1_3?oldid=1441709"
Community content is available under CC-BY-SA unless otherwise noted.