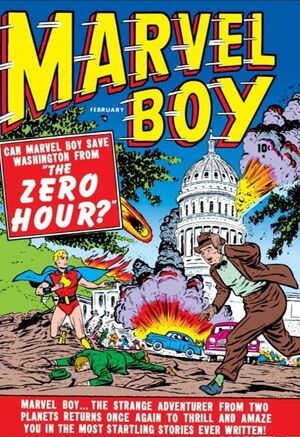 Appearing in "The Zero Hour!"Edit

Synopsis for "The Zero Hour!"Edit

On Uranus, Matthew Grayson calls his son the Marvel Boy to his lab to show him the danger that is threatening planet Earth. He shows Marvel Boy an image of a massive planetoid that has appeared in Earth's orbit and is showering the planet with meteor fragments that are blasted off the plantoid's surface. Marvel Boy agrees to go to his native planet of Earth and help defend it and soon leaves in his atomic rock the Silver Bullet. After dodging a number of alien ships he lands on the planetoid and realizes that it is the planet Astros, inhabited by the evil Astro-Men.

Marvel Boy is soon spotted by the Astro-Men and taken prisoner. He is brought before the leader of the Astro-Men, Saramin. Saramin explains that his plan is to devastate the Earth with meteor bombardment so that he and his people can then invade and take over the Earth and sends him to the palace dungeon. Meanwhile, on Earth, the planet is bombarded by meteors laying waste to major cities across the globe. It prompts the leaders of the world to meet in an emergency meeting to find a solution to stop this attack. All nations of the world agree to work together to solve the crisis. While back on Astros, Marvel Boy uses his light bands to break free from his cell and return to Earth.

There, Marvel Boy meets with the world leaders to develop a solution and finds that all the nations of the world except for an eastern communist nation agree to help. Marvel Boy then provides them with Uranian technology to build cannons to blast the meteor fragments out of the sky with atomic weapons in order to defend the Earth. When the meteors are repelled, the Astro-Men launch an attack sending their space ships to attack the Earth. Marvel Boy in his Silver Bullet then leads an air force of various nations on the counter attack and repels the invasion. In the aftermath of the battle, the Saramin is captured. But then the united nations are attacked by the eastern country.

With no means of defending themselves, Marvel Boy takes Saramin and forces him back to the planet Astros, they then use the meteors from Astros to bombard the the communist nation into submission. In the aftermath of the battle, Marvel Boy shows Saramin the destruction caused causing the horrified dictator to change his position and agrees to have he and his Astro-Men help rebuild the world. Marvel Boy then leaves the Astro-Men to forge a new life on Earth and destroys the planet Astros. He returns to Uranus where his father congratulates Marvel Boy for a job well done.

Appearing in "Blasts of Doom!"Edit

Synopsis for "Blasts of Doom!"Edit

Marvel Boy comes to the planet Earth after receiving a call from his friends reporter Pete Mason and Starr Ryder. They tell Marvel Boy about a mining town in Pennsylvania that has a constantly burning mine underneath that threatens to explode. Marvel Boy agrees to go out and investigate the phenomenon and try to stop it.

They quickly travel to Pennsylvania where the foreman of the mine tells them that if the fire is not stopped before it reaches the main branch of the mine it will cause an explosion that will crack the country in half. Marvel Boy decides to go down and see what he can do. Overhearing this, two of the mine workers try to stop him, but Marvel Boy easily defeats them in a fist fight and heads down the mine shaft. Down below he finds evidence that identifies that the explosions were not natural and heads back up to warn the others. The two workers are there to try and stop him but Marvel Boy takes some Uranium pulls and fights back, easily besting them.

As the owner of the mine arrives, Marvel Boy's telepathic abilities outs him as a communist spy and that they had purposely planted the bombs. With another bomb down below, Marvel Boy pressures the spy for its location but the spy refuses. Gleaming it's location by reading the spies mine, Marvel Boy travels down below. Marvel Boy then travels down into the mine, defuses the bomb and then uses a number of crushed Uranium pills to blast the dangerous fissure in the rock to prevent the cataclysm from happening. Returning to the surface, Marvel Boy tells the miners that they can attempt to put the fire out now, and failing that can mine around it without fear of allowing it to spread.

Appearing in "Terror at the Circus!"Edit

Synopsis for "Terror at the Circus!"Edit

After yet another fire at local circus the owners of the Amalgamated Insurance Company fear that continued insurance claims will drive their company out of business and have their lead investigation Bob Grayson, aka Marvel Boy, go to investigate the fires to see if foul play was involved.

Grayson goes to the circus and is hired on as an acrobat, using his Uranian honed skills to land the job. While working for the circus he meets Starr Ryder, an equestrian rider that works for the circus. She warns him to beware of Marvo the Magician the mind reader at the circus who is none too nice. Feeling something strange in his mind, Marvel Boy returns to his tent and is shocked to find that his Uranium pills have been stolen. Later that day, when he is practising his routine, Marvel Boy almost is fatally hurt when the tightrope breaks. It is brushed off as an accident, but Bob is not convinced of this fact.

Later that night he calls the Evening Recorder and tells the story to his reporter friend Pete. He is later visited Starr who warns him that she spotted Samson, the circus strongman, snooping around in his tent earlier. When Starr leaves Bob's tent, she is nabbed by Samson who brings her to Marvo who has found her too much of a risk to interfere with his plans to eliminate Bob during the performance the next day and leaves her tied up in the tent. As she struggles to get free, Starr spots Bob's pill case among the possessions on Marvo's desk and tries to cut through her bonds on the edge of a trunk.

During the performance, Samson attempts to cause Bob to fall to his death during the tightrope act, but this time Grayson is ready for it and dives into Samson knocking him out. Marvo then unleashes some of the lions from their cages but Marvel Boy downs them with his light bands then turns them against Marvo, defeating him. Soon after Pete Mason and the police arrive on the scene and Starr breaks free.

In the aftermath, Marvel Boy explains that the circus was on the verge of going bankrupt and the owner had owed Marvo over a million dollars and that Marvo caused the accidents to force the circus to cash in on their insurance policies and pay him off.

Retrieved from "https://heykidscomics.fandom.com/wiki/Marvel_Boy_Vol_1_2?oldid=1441700"
Community content is available under CC-BY-SA unless otherwise noted.