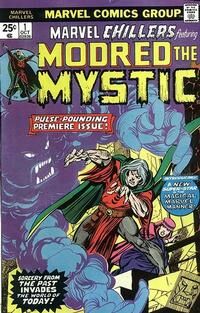 Appearing in "--- Magic Is Alive!"Edit

Synopsis for "--- Magic Is Alive!"Edit

Janet Lyton and Grant Whittacker are digging in a tunnel to find the lost tower of Darkhold in England. Janet's devotion to this find leads them to work through a storm, which washes out the supports of their tunnel, causing it to cave in and trapping them inside. They find another tunnel has been unearthed, however, and it gives off a powerful light. In the adjoining chamber they find what they believe is a perfectly preserved human body in a tomb dating back to the Dark Ages.

However, when Janet accidentally knocks over one of the braziers of strange fire, the man comes to life. He reveals himself to be Mordred, a magician's apprentice during the final years of Camelot. He tells them how he was the pupil of a wizard by the name of Gervasse, and was betrothed to his daughter Janice. However, Mordred was ordered to resume his training under the tutelage of Merlin. Refusing to do so, as it would mean never getting married to Janet, Mordred (in a bid to prove himself an adequate mystic) decides to go to the tower of Darkhold and claim the book of Darkhold, in the hopes that he will be the first magician to ever conquer it, as it is said that the book steals the souls of those who try to master it.

Mordred climbed the top of the tower and combatted the book's mystic might. This duel of magic was interrupted when Janice tried to stop him from facing the book. The book took advantage of this and tried to possess Janice's soul. However, Mordred sacrificed his own in order to save her and entered into a death-like trance. Knowing that Mordred would one day return to life, Gervasse had a special tomb prepared for the man's body to prevent him from suffering the wrath of time.

Finishing his story, Mordred's tale is questioned by Whittacker who doesn't believe in magic. However, he changes his tune a little when Mordred uses his magical abilities to free them from the tunnel, magnetizing the rocks that trap them so that they repel from each other.

Finally free of the tunnel, Mordred muses on what wonders he'll see now that he's walking the Earth again after 1100 years in suspended animation.

Retrieved from "https://heykidscomics.fandom.com/wiki/Marvel_Chillers_Vol_1_1?oldid=1441711"
Community content is available under CC-BY-SA unless otherwise noted.