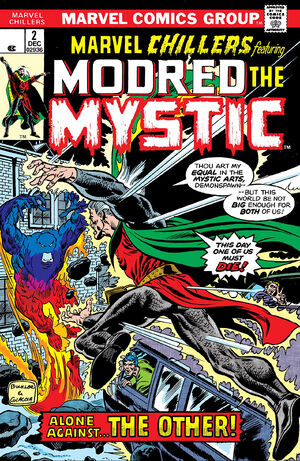 Appearing in "Of Magic and Madness!"Edit

Synopsis for "Of Magic and Madness!"Edit

Having appeared in London, Mordred witnesses the progress of 11 hundred years has done to his land. Not understanding the objects around him he lashes out with his mystical might, bringing out the police. After he's winged by a bullet, Mordred is pulled out of the scene by Janet Lyton and Grant Whittacker and they escape in a van.

After treating Mordred's wound and recalling how they came to meet one another, they are suddenly stopped when a bright sphere of energy appears in the middle of the road. Mordred recognizes it as the Other, the creature which powered the book of Darkhold. The mystical being has come to collect Mordred's soul, however Mordred decides to put up a fight. Using his magical powers to protect Janet and Grant with trees, Mordred is locked in a mystical duel against the Other.

Although the Other shows a tremendously powerful source of magic, Mordred eventually fights off and defeats the Other, who disappears following their combat. Following the battle, Janet and Grant turn out to be okay, except Grant still skeptical of Mordred's magical powers. He tells them that although he managed to defeat the Other, the power of the Darkhold is infinite and they will face it again.

Retrieved from "https://heykidscomics.fandom.com/wiki/Marvel_Chillers_Vol_1_2?oldid=1441712"
Community content is available under CC-BY-SA unless otherwise noted.