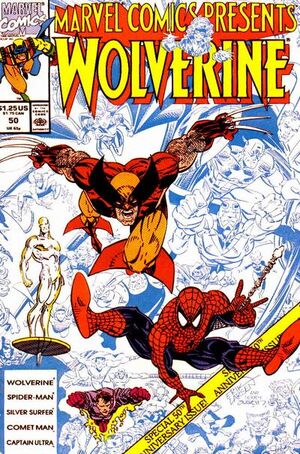 Spider-Man and Wolverine have been taken down by the mind blast of the mutant girl they've come to save. Now her captors are closing in on the unlikely duo.

Stephen Beckley has returned to Earth for two reasons: 1) To find his missing son, and 2) To take revenge on his brother for ruining his life.

Captain Ultra vs. Ekl'r, the demon without humor.

While flying through the void of space, the Silver Surfer encounters a strange phenomenon, a miniature black hole. On the other side the cosmic wanderer must confront, a Space Pirate, a beautiful woman and moral dilemma from his days as the Herald of Galactus.

Retrieved from "https://heykidscomics.fandom.com/wiki/Marvel_Comics_Presents_Vol_1_50?oldid=1441802"
Community content is available under CC-BY-SA unless otherwise noted.