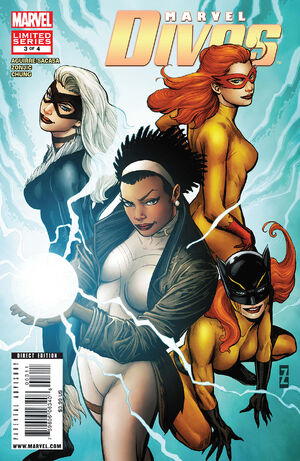 Appearing in "A Night to Remember"Edit

When Angelica ”Firestar” Jones' battle takes a turn for the worse, Patsy “Hellcat” Walker makes a deal with the Son of Satan to save her friend's life. Fortunately (or unfortunately), Monica “Photon” Rambeau’s gotten ahold of one of the world's most powerful occult objects – but does she have the will to control it? Meanwhile, Felicia “The Black Cat” Hardy slips back into her black bodysuit (and her old life of crime?)…putting her into direct conflict with her on-again-off-again flame, the Puma! It's the brawl for it all, folks, and someone's getting their face messed up!

Retrieved from "https://heykidscomics.fandom.com/wiki/Marvel_Divas_Vol_1_3?oldid=1725190"
Community content is available under CC-BY-SA unless otherwise noted.