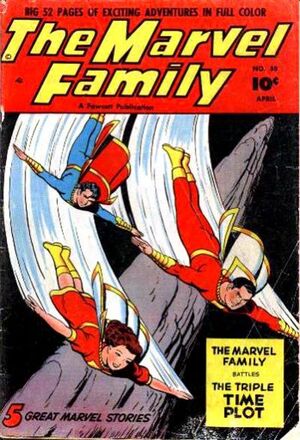 Appearing in "The Triple Time Plot"Edit

Synopsis for "The Triple Time Plot"Edit

The Marvels are summoned to the Rock of Eternity by Shazam. Shazam on his Chronoscope shows a danger to civilisation. Leonardo da Vinci, who is called the greatest genius of all past ages, is shown in 1500 being attacked by a hooded figure who Shazam says they shall call Doctor X. He then shows the greatest scientist of 3000 AD, Master Zane, being attacked by Doctor Y, who has a Y on his hood. Then in 1951 Professor Bockberg the Mathematician is shown being attacked by Doctor Z. Shazam says these three men are the Greatest Geniuses of Human History, of the Past, Present, and Future. Doctor X, Y, and Z are planning to steal their minds. Shazam says he cannot tell any more, but they will conquer all civilisation for all time if they succeed. Jr. goes to the Past, Mary to Future, and Captain Marvel to Present. Jr thinks he is attracting too much attention so becomes Freddy again. He cleans up Da Vinci's studio while the genius works on a submarine. But Doctor X, with an X on his head, comes up through the floor using a trapdoor and knocks Freddy out. When he comes to he and Da Vinci are both tied to chairs and gagged. X has connected a device to the brain of Da Vinci which will record the convulations of Da Vinci's brain onto the mechanical brain. With the minds of the Geniuses he plans to make weapons to crush civilisation. When he finishes he throws a knife at Da Vinci but Freddy strains up out of his chair and cuts his gag off, allowing him to transform. He saves Da Vinci stopping the knife with hs hand. X escapes in a Rocket shp which is a Time ship, but Jr. holds it and is dragged through time. In 1951 the rockets are turned on knocking Jr. off, but it moves towards a cave, which Jr. follows it to. In 3000 Mary Marvel is sent out of Zane's lab as he is busy. She pretends to be his daughter Kitty as he is near-sighted. He completes invention 6,787, and she says he is the Thomas Edison of the Future. However Y then swings down and knocks her out. When Mary comes to she is tied on a chair and gagged, while Zane is strapped to a chair and the metal brain has taken his knowledge. Y sets the place on fire, but Mary sticks her face in the flames so her gag burns of and she transforms. She takes Zane out, then chases Y through time by hanging onto his ship. Again she follows him into a cave. Cap watches Bockberg for hours but distracts him so turns to Billy, saying he wants to hear about his new formula. Bockberg says his formula controls thought and they can build thought broadcasters someday like radio stations, but Billy is knocked out from behind by Z's gun-blow to the head. He and Bockberg are tied to chairs and Billy is gagged. Before Bockberg can be shot after Z has the recording of his brain, Billy gets his gag off by hooking it on the gun, transforms, stops the bullets, then unties Bockberg and chases Z to the cave, where he meets the other 2 Marvels. They fly in and Cap defeats Z, but they can't find the other two. Cap realises X, Y, and Z were the same guy. In answer to Mary asking how they could be fought at the same time, Cap points out they fought him in different times. Shazam says only the Marvel Family could have stopped the attack and Cap smashes the metal brain. Presumably the villain goes to jail.

Retrieved from "https://heykidscomics.fandom.com/wiki/Marvel_Family_Vol_1_58?oldid=1498897"
Community content is available under CC-BY-SA unless otherwise noted.