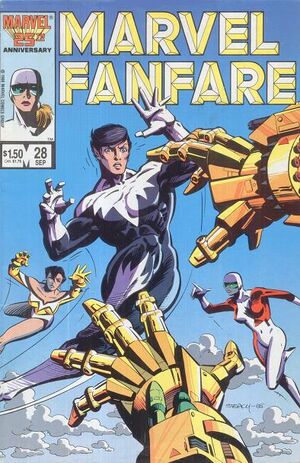 Northstar's old terrorist friends are being stalked by a villain named Scourge. Scourge is using one of the prototypes of Mac's Weapon Alpha armour with some add-ons to kill the former members of Cell Combattre, Northstar's Quebecois terrorist cell. Jean-Paul comes to try to save the survivors. Alpha Flight follows, tracking him through his implant. At the end, he has his implant removed, feeling it violates his privacy.

Retrieved from "https://heykidscomics.fandom.com/wiki/Marvel_Fanfare_Vol_1_28?oldid=1442110"
Community content is available under CC-BY-SA unless otherwise noted.