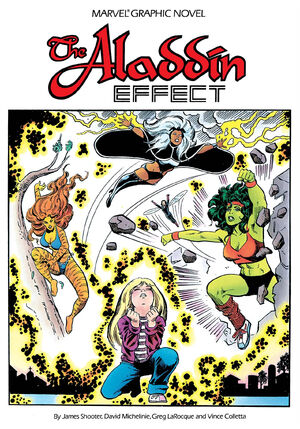 Appearing in "The Aladdin Effect"Edit

Synopsis for "The Aladdin Effect"Edit

The town of Venture Ridge, Wyoming was located near a secret AIM base, where the organization performed research into new power sources. When the head of the base, Timekeeper, realized that there was a powerful energy source within the town itself, he sealed off the town to the outside world so it wouldn't be seized by others, leaving the people inside at the edge of starvation and anarchy.

Local Sheriff Joseph Ember’s eight-year-old daughter Holly-Ann Ember idolized superheroines, and made a wish on her newspaper clippings scrapbook for the heroines in question to come to her rescue. The heroines in question – Storm, Wasp, Tigra and She-Hulk were suddenly torn from their normal lives and transported to Oak Ridge, feeling a touch of amnesia. The heroines soon discovered the town was surrounded by an invisible barrier.

The heroines were soon tormented individually by the locals, the Timekeeper, the Timekeeper's girlfriend, and AIM. AIM have been developing various radiation weapons here for decades. The heroines discovered that Holly-Ann was the source of power that AIM sought, and they vowed to fight to protect her. The women battled AIM soldiers and a giant robot under their control with the aid of some of the townsfolk. Soon the villains were turned over to SHIELD, and the town and its inhabitants were saved. Storm left an Xavier's School for Gifted Youngsters card with the mutant Holly, should she wish to explore her power further.

Retrieved from "https://heykidscomics.fandom.com/wiki/Marvel_Graphic_Novel_Vol_1_16?oldid=1442185"
Community content is available under CC-BY-SA unless otherwise noted.