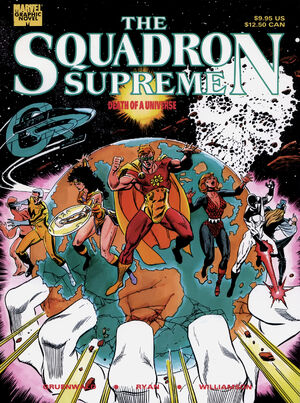 Appearing in "Death of a Universe"Edit

Synopsis for "Death of a Universe"Edit

When the living space warp known as the Nth Man was transported to the universe of Earth-712 his power immediately threatened to consume the sun, thus dooming all of the inhabitants of that Earth. The planet's premier team of superheroes, the Squadron Supreme knew they had to stop him.

The infant son of Squadron member Arcanna, Benjamin inherited the mantle of that Earth's Sorcerer Supreme from its former holder Professor Imam and used his powers to contact the Nth Man, Thomas Lightner, offering to swap places with him. Lightner agreed, and became that Earth's Sorcerer Supreme, while Benjamin became the Nth Man and set about repairing all the damage that had been done to various universes.

Lightner transported the Squadron to Earth-616, as he had plans to try and conquer Earth-712 with his new mystical powers.

Retrieved from "https://heykidscomics.fandom.com/wiki/Marvel_Graphic_Novel_Vol_1_55?oldid=1442224"
Community content is available under CC-BY-SA unless otherwise noted.