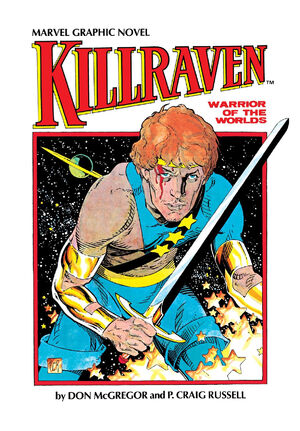 You are going nowhere, Killraven. You have only had a brief respite while I tried to understand what has happened here. I have no need of further pause...and you have truly come to the end of your days!

Prologue:
The story begins by recapping the Martian invasion of the year 2001, followed by a recap of Killraven and his Freemen's previous adventure, and of the Martian Masters.

Last Dreams Broken:
Cape Canaveral, Florida, February 2020: As tension mounts between Killraven and his Freemen as they continue their quest to find Killraven's brother. They have found themselves near Cape Canaveral. As Carmilla and M'Shulla's relationship becomes strained, Killraven experiences a black out where he learns his old foe, the High Overlord is residing inside the Cape Canaveral. As they are discuss this revelation they are met by somebody who has been watching them since they arrived.

Chapter 2: Cocoa Beach Blues:
Introducing herself Jenette Miller, the newly arrived person tells those that she is one of the last pre-invasion astronauts who has been one step ahead of the Martians. Explaining the about her past and the downside of being a female astronaut, she is invited into Killraven's group as they continue their trek to Cape Canaveral, Killraven having another black out as he experiences a flashback to the past to experience the assassination of JFK when Jenette explains that Cape Canaveral used to be called Cape Kennedy. Meanwhile, Carmilla reveals to M'Shulla that she believes she is pregnant, causing the two to argue over the implications of what a pregnancy can bring to their lives. Things are interrupted when yet another person arrives, an older man, being attacked by wolves.

Chapter 3: Blood and Passion
The Freemen save the man from the attacking wolves, and learn that the man is none other than Killraven's long-lost brother Joshua. There is a reunion of sorts, with Joshua telling Killraven how he managed to survive over the years, inspired by stories of his brothers rebellion and how he eventually managed to escape his Martian captors.

Chapter 4: Let It Die Like the Fourth of July
Finally arriving at Cape Canaveral, Killraven and his Freemen realize that they have been lured into a trap, and that Joshua is really working for the Martian's who have gifted him with the ability to transform into a giant lupine form. With the Freemen battling Deathraven, the Overlord's genetic engineers finish creating their latest mutate, however the Freement turn the beast on Deathraven, the creature killing him. Attempting to take the fight to the Overlord, the Martian sets the Cape to self destruct, however Killraven and his Freemen escape to continue their war against the Martians another day.

Retrieved from "https://heykidscomics.fandom.com/wiki/Marvel_Graphic_Novel_Vol_1_7?oldid=1442176"
Community content is available under CC-BY-SA unless otherwise noted.