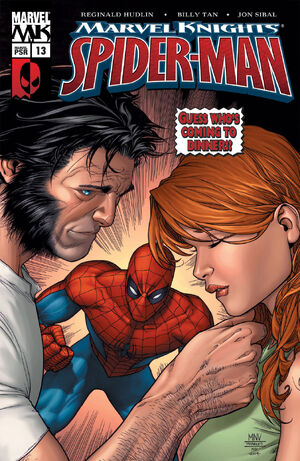 In part one of "Wild Blue Yonder," Peter Parker’s life is turned upside down.

He’s got an incredible new pad (you won’t believe where), a new job, and -- although he doesn’t know it -- a new nemesis who’s everything that Peter isn’t.

But first, Spider-Man’s got to deal with a more pressing problem – a shape-shifting super-villain who’s developed a nasty habit…and will do anything to feed it.

And Wait – Who’s that hitting on Mary Jane!?

Retrieved from "https://heykidscomics.fandom.com/wiki/Marvel_Knights:_Spider-Man_Vol_1_13?oldid=1651622"
Community content is available under CC-BY-SA unless otherwise noted.