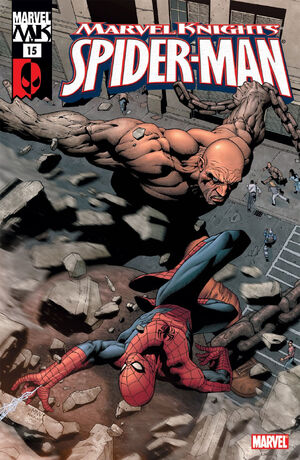 Well... At least I finally know what a cape's good for.

-- Punisher referring to Ethan Edwards having his clothes blown off and covering his parts with the remainder of his cape.

Crusher Creel has developed a nasty habit and he’ll do anything to feed it! Looks like a job for…Spider-Man.

That is, unless a certain new hero on the scene doesn’t get there first…

Retrieved from "https://heykidscomics.fandom.com/wiki/Marvel_Knights:_Spider-Man_Vol_1_15?oldid=1442373"
Community content is available under CC-BY-SA unless otherwise noted.