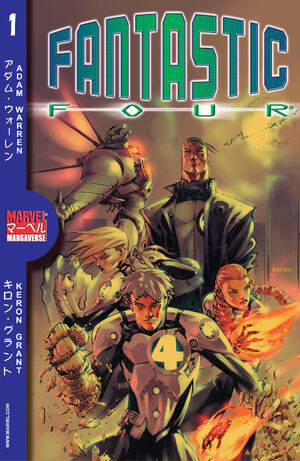 The second Mangaverse graphic novel continued storylines produced in the original series which was later collected as the first graphic novel. This series, at the start, brought back the Mangaverse version of the Fantastic Four, although slightly modified in appearance from the initial look they had in the mid-part of the first volume (though in the final issue they look as they do in volume 2). The story also introduced Mangaverse versions of Galactus (as a parasitic life form created by the Skrulls), The Watcher (who appears to be closest in characterization to his respective counterpart than any other Mangaverse character), a 13 year old Captain Marvel, gigantic versions of four heralds of Galactus, and the Inhumans. An armored individual resembling Doctor Doom made a cameo in these first few issues, who then became the primary villain for the remainder of the series. Revealed to be the sister of Black Panther, this version of Doom decimates the Avengers, and it is only through the combined efforts of the Fantastic Four, Doctor Strange, Tigra, and the Scarlet Witch (the lone surviving member of the Mangaverse Avengers) that the heroes are able to defeat this version of Doom and restore some semblance of order after the mayhem caused by Doom.

The Scarlet Witch did not appear in the New Mangaverse storyline (perhaps slain as were 99% of the world's other heroes). Tigra and Doctor Strange appeared in the first few pages of the New Mangaverse comic to be brutally murdered by the Hand ninja.

Volume 2 is notable for borrowing plot elements and style from the anime Neon Genesis Evangelion.

Retrieved from "https://heykidscomics.fandom.com/wiki/Marvel_Mangaverse:_Fantastic_Four_Vol_1_1?oldid=1442412"
Community content is available under CC-BY-SA unless otherwise noted.