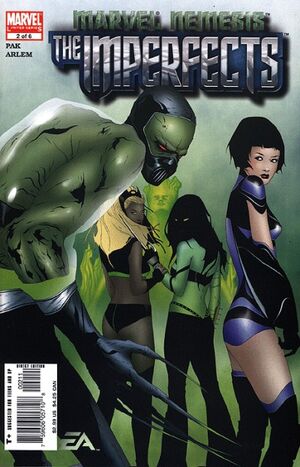 No wait, I gotta a better one-- Orange you glad I got my old flames back?

Appearing in "Rise of the Imperfects, Part 2 of 6"Edit

Synopsis for "Rise of the Imperfects, Part 2 of 6"Edit

Transformed into perfect fighting machines and set against each other in Roekel's secret arena , the heroes launch into berserker-style battle with each other. Even Spider-Man and Human Torch are prepared to fight to the death, until Spidey begins to reject the extract, freeing himself from the seductive cybernetic material's power. As the other heroes free themselves, some have to have it forced off-- leaving a missed feeling towards it.

Roekel, in search of a new subject, kidnaps others he believes will more willingly accept the extract--and his leadership. Among them is convict Johnny Ohm, cripple Maria Petrova, and scientist Reiko Kurokaki.

Retrieved from "https://heykidscomics.fandom.com/wiki/Marvel_Nemesis:_The_Imperfects_Vol_1_2?oldid=1442461"
Community content is available under CC-BY-SA unless otherwise noted.