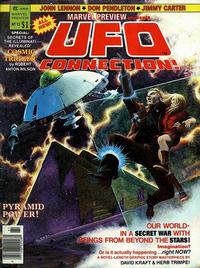 A scientist and his family become victims of an alien species that have acted as psychic parasites upon humans when he discovers the aliens had the Egyptian pyramids constructed as accumulators to transfer psychic energy from humans to them.

Retrieved from "https://heykidscomics.fandom.com/wiki/Marvel_Preview_Vol_1_13?oldid=1442558"
Community content is available under CC-BY-SA unless otherwise noted.