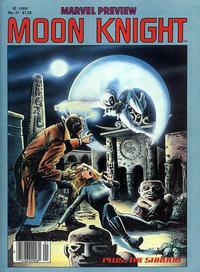 A synopsis of Moon Knight's origins and evolution from one-time villain in Werewolf By Night to being a Marvel super-hero. Recaps all of his appearances to date.

Appearing in "The Mind Thieves"Edit

Synopsis for "The Mind Thieves"Edit

When Marc Spector is mailed the corpse of his former colleague Amos Lander, it prompts him to investigate Lander's last known mission - Operation: Cobra, in order to find out how his friend had died. In researching Ravencraig Asylum Moon Knight is attacked by a masked being, and escapes before the asylum is destroyed.

When his leads taking him to a dead end in Canada, Marc travels to Paris where he finds that the organization known as the Company was responsible for Amos's death and that their agents Charles LeBlanc and James Lardner are trying to get revenge on Spector. Moon Knight defeats LeBlanc, but Marlene is captured by the Company's men. Moon Knight comes to he rescue and has to fight James Lardner, who has become to Guinea pig of Operation: Cobra. Implanted with electrodes on his head, Ladner -- dubbed the Cobra -- has become the pefect emotionally regulated killing machine.

However, the Cobra proves to be no match for Moon Knight, and falls victim of an exploding car which he intended to throw at Moon Knight. With Operation: Cobra in ruins, Moon Knight mails the Cobra's body to the Company as a message to them of their failure. He returns home with Marlene where he updates his records.

Appearing in "Laughing in the Dark"Edit

Synopsis for "Laughing in the Dark"Edit

Synopsis for "Walk a Crooked Mile!"Edit

Retrieved from "https://heykidscomics.fandom.com/wiki/Marvel_Preview_Vol_1_21?oldid=1442566"
Community content is available under CC-BY-SA unless otherwise noted.