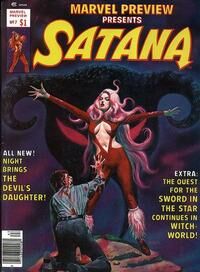 Appearing in "Why a Devil's Daughter...?"Edit

Synopsis for "Why a Devil's Daughter...?"Edit

Realizing that destroying Satana outright would unleash the Basilisk inside her upon the world, the Carmarilla of the N'Garai uses a spell to trap Satana in a fabricated life. That of a mortal named Judith Camber. However, the Basilisk would try to gain control, and eventually slay "Judith's" family.

Upon learning of the death of her family, "Judith" soon regained control of her Satana persona for brief periods. That is until the Carmarilla extracted Satana's soul from Judith's body to sacrifice to the N'Garai. Realizing that Satana's death would mean her own, Judith would travel to the Carmarilla's Church of Dis and unleash the Basilisk. The demon would slay the Carmarilla and Judith and destroy the church before remerging with the restored Satana.

Appearing in "From the Devil, A Daughter"Edit

Synopsis for "From the Devil, A Daughter"Edit

A text summary by Chris Claremont about the genesis of the Satana character, her various appearances in Marvel Comics publications to date, and a number of problems that faced the Marvel Bullpen getting the character jump-started.

Appearing in "Just a Little Over a Year Ago Today..."Edit

Synopsis for "Just a Little Over a Year Ago Today..."Edit

Synopsis for "The Sword in the Star! Stave 2: Witchworld!"Edit

Continuation and the last chapter (incomplete) of The Star in the Sword! saga. Here Prince Wayfinder comes to the mysterious planet known as Witch-World, a strange planet that appears as a big forest. Here he meets Rocket Raccoon, who allied with Wayfinder when a monstrous tree, the Plagueosaur, appears. After the Plageosaur's defeat and death, a mystical being called Kirke appears.

Marvel Preview Vol 1 4 (for The Sword in the Star! saga)

Retrieved from "https://heykidscomics.fandom.com/wiki/Marvel_Preview_Vol_1_7?oldid=1730816"
Community content is available under CC-BY-SA unless otherwise noted.