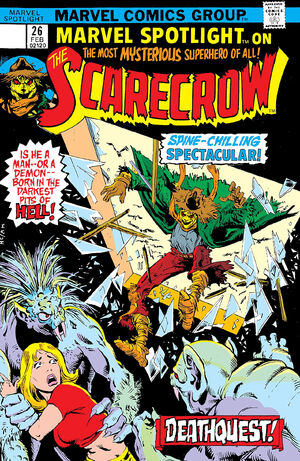 Appearing in "Death Waters of the River Styx"Edit

Synopsis for "Death Waters of the River Styx"Edit

Demons that worship Kalumai have appeared on Earth through the Scarecrow painting. They go to a local police station in order to collect the horn of Kalumai (in the possession of the police following the death of it's former owner Gregor Rovik.) The creatures kill a few police officers to try and gain the horn, and end up fighting the Scarecrow. The Scarecrow defeats the monsters and takes back the horn, and tries to take it back into the painting in Jess Duncan's apartment, but the horn doesn't make it through.

Jess and his fiancee Harmony return home and find the horn, they are also suddenly visited by Dave Monroe who is all exhausted for some unknown reason. They all decide to check out an exhibit of a giant deep sea fish that is on display at the local aquarium (Harmony taking the horn with her) There they are attacked by more demons sent by Kalumai to retrieve the horn.

Harmony is trapped in the room with the demons as Dave disappears and Jess can only watched from the window of a locked door. The Scarecrow appears and battles the demons. During the fight the straw man smashes open the aquarium tank and uses his magical powers to create a whirl pool that swallows all the demons (and fish) up.
The Scarecrow then leaves as mysteriously as he enters, leaving Jess and Harmony to wonder about the Scarecrow's true identity. Meanwhile, in another dimension Kalumai watches in bitter frustration over the whole failed mission and vows that one day soon he will destroy the Scarecrow.

Retrieved from "https://heykidscomics.fandom.com/wiki/Marvel_Spotlight_Vol_1_26?oldid=1442647"
Community content is available under CC-BY-SA unless otherwise noted.