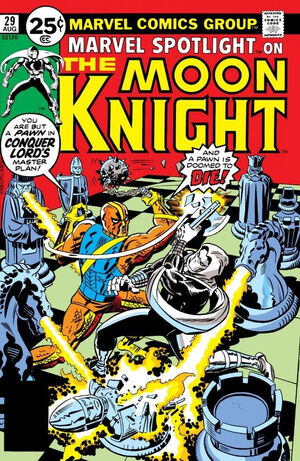 Appearing in "The Deadly Gambit of Conquer-Lord!"Edit

Synopsis for "The Deadly Gambit of Conquer-Lord!"Edit

Continued from last issue... Moon Knight tries to prevent the Conquer-Lord from assassinating the mayor, while he succeeds in preventing the mayors death, the mayor is still wounded from the shot, and Conquer-Lord and his minions manage to escape with Marlene as their hostage.

Moon Knight is then dumped into a chess board themed battle arena where he is forced to fight the Conquer-Lord and his gigantic trick chess pieces. Although the Conquer-Lord tries to escape, Moon Knight manages to stop him and save Marlene, leaving the unmasked Conquer-Lord for the authorities, with his calling card left identifying Moon Knights involvement.

Retrieved from "https://heykidscomics.fandom.com/wiki/Marvel_Spotlight_Vol_1_29?oldid=1539637"
Community content is available under CC-BY-SA unless otherwise noted.