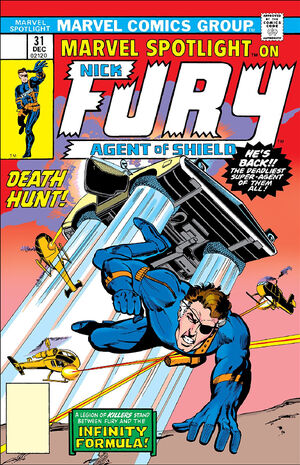 I suddenly realized Val was one hell of a woman!

Appearing in "Assignment: The Infinity Formula!"Edit

Synopsis for "Assignment: The Infinity Formula!"Edit

This story reveals that Nick Fury was seriously wounded in France during World War II. He was saved in part due to Professor Sternberg's Infinity Formula. Fury must be inoculated by the serum every year or he will age dramatically. Since Fury's first inoculation, the Colonel had to pay a blackmail price to Sternberg every year to acquire the serum.

However, Steel Harris kills the Professor and now has the serum. He decides to blackmail Fury even further by making demands to become immersed in SHIELD and other National Security briefings. Nick finds Harris in Las Vegas and battles him and his minions. Even though the Colonel defeats Harris and his thugs, the future indeed looks bleak for Fury as he begins to incredibly age (from not receiving an inoculation of the Infinity Formula). However, the timely intervention of Val de Fontaine saves the day. Fontaine had previously liberated the serum from its captors and inoculates Fury just in time to save his life.

Retrieved from "https://heykidscomics.fandom.com/wiki/Marvel_Spotlight_Vol_1_31?oldid=1498404"
Community content is available under CC-BY-SA unless otherwise noted.