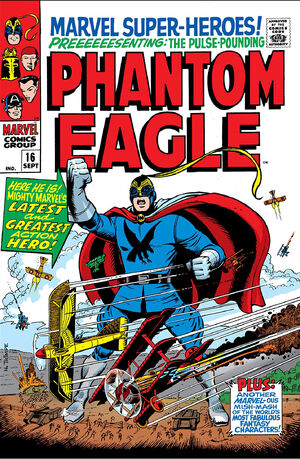 The Phantom Eagle will fly the skies again and again ... until the threat of the Kaiser is ended!

Appearing in "The Phantom Eagle"Edit

Synopsis for "The Phantom Eagle"Edit

Karl Kaufman and his friend Rex Griffin grow up together and become pilots before WW I. Rex joins the military and tries to get Karl to join, but as his parents are in Germany, and seeing the writing on the wall that the US may have to enter the war raging in Europe against Germany, he refuses as he fears reprisal by the German government against his parents. He decides to enter on his own as a masked pilot calling himself the Phantom Eagle. Discovering that German Fokkers and a dirigible are attempting an invasion of the United States East Coast, Kaufman alerts Rex to get his commander, Major Norris to mount a defense. Norris is away, so Rex, though injured and grounded due to those injuries, takes it upon himself to lead a group of pilots to thwart the German hostiles. The Phantom Eagle joins the fight and even though he is able to board the dirigible and plant a bomb, destroying the command of the air attack, his friend Rex takes fire on his plane and is killed. Kaufman is devastated by his loss and vows to fight the Germans whenever he may be called upon to do so.

A spaceship flies over the city, dropping a message from "Comrade X" of the "Red Planet" saying the world will be destroyed as they need it for their growing population. A gigantic, monstrous creature with 8 heads parachutes from the craft and begins destroying the city! The Torch and Toro tackle it, but it appears fireproof. It also has a poisonous, fang-like tongue, which poisons Toro. The Torch rushes him to Dr. Carter, who says the only way to save Toro's life is with a transfusion, and The Torch is the only one with the same blood type. As buildings continue to be destroyed, The Torch uses the Doctor's chloroform to knock the creature out, then returns to give Toro the transfusion.


Appearing in the 4st StoryEdit

Synopsis for the 4st StoryEdit

Appearing in the 5st StoryEdit

Synopsis for the 5st StoryEdit

Appearing in the 6st StoryEdit

Synopsis for the 6st StoryEdit

Retrieved from "https://heykidscomics.fandom.com/wiki/Marvel_Super-Heroes_Vol_1_16?oldid=1442750"
Community content is available under CC-BY-SA unless otherwise noted.