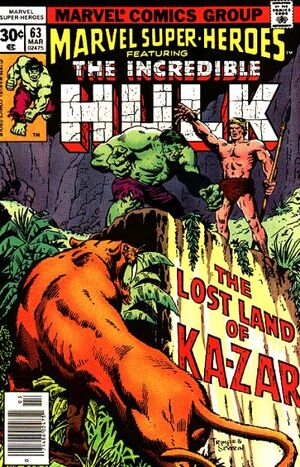 Appearing in "The Monster and the Man-Beast"Edit

Synopsis for "The Monster and the Man-Beast"Edit

The Hulk rampages across a Chinese military base, swatting away soldiers with a long piece of timber. The soldiers fire a shell from a tank, but the Hulk uses his pole as a lever and upends the tank. More soldiers arrive and open fire on the Hulk, but the bullets bounce harmlessly off him. Annoyed, the Hulk leaps into the air and lands some distance away from the base.

As night falls, the Hulk walks through a dark canyon, accidentally setting off a hidden electronic eye. The signal alerts more soldiers and they mount a second attack against him. The Hulk dives into the soldiers and sends them sprawling. He then picks up a Howitzer cannon and begins swinging at them.

He then realizes that he has wandered towards a missile base. A large rocket is in the final phases of its countdown, so the Hulk leaps onto the hull of the ship, hoping to ride it to a better place. The Hulk's weight alters the calibration of the rocket's guidance systems, altering its course. The unmanned missile crashes into the middle of Antarctica and the resulting explosion from the crash renders the Hulk unconscious.

He awakens as Bruce Banner and discovers that he is now in the ecological oddity known as the Savage Land. A tribe of barbarian Swamp Men finds him and prepares him for a ritual of human sacrifice. Ka-Zar, Lord of the Savage Land finds the Swamp Men, and battles them, freeing Bruce Banner.

A short time later, Ka-Zar tells Banner about a glowing yellow energy emanating from a mysterious cave. Banner asks Ka-Zar to show him the cave, and he discovers an ancient device generating atomic radiation. Banner examines the artifact and is horrified to learn the machine is designed to gradually alter the rotation of Earth's axis. Such an act would ultimately destroy the entire world.

Retrieved from "https://heykidscomics.fandom.com/wiki/Marvel_Super-Heroes_Vol_1_63?oldid=1551569"
Community content is available under CC-BY-SA unless otherwise noted.