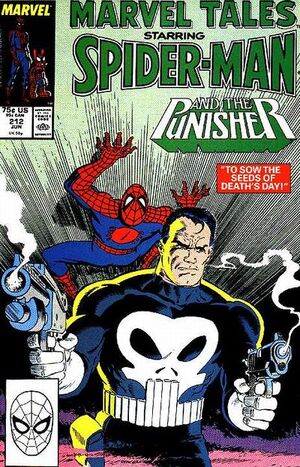 While Peter Porker, the Spectacular Spider-Ham, is cleaning his dishes in his kitchen, his drain clogs up just as he hears a report on the news about local plumbers being kidnapped. To find a plumber, he seeks out his underworld informant, Catfish LaRoe, to see if he knows anything about the kidnappings. Spider-Ham finds LaRoe at the Oyster Bar filling out I.R.S. income tax forms in the aftermath of a violent brawl. Spider-Ham wonders who could have punished LaRoe like that.

Meanwhile, the Punfisher intervenes during a plumber kidnapping occurring at Penguin's Plumbing. The Punfisher attempts to punish the kidnapper by making him carry a pizza across the street into Diet Land when Spider-Ham swings by and attacks the Punfisher, mistakenly thinking the Punfisher is kidnapping the actual kidnapper. A brief battle ensues wherein the Punfisher gains the upper hand.

Retrieved from "https://heykidscomics.fandom.com/wiki/Marvel_Tales_Vol_2_212?oldid=1443133"
Community content is available under CC-BY-SA unless otherwise noted.