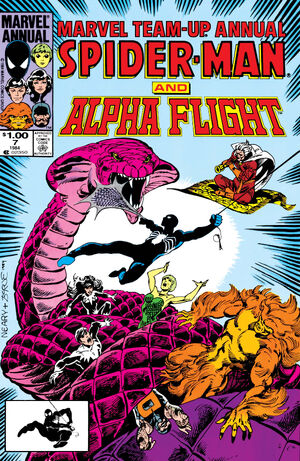 Appearing in "The Collected Spider-Man"Edit

Spider-Man teams up with Alpha Flight for this once-a-year spectacle! The Collector is on the loose! First, he collects Spidey — then he collects Marrina — and then the action starts! Plus — Ever wonder what a super hero battle is like... from an innocent bystander's point of view? This offbeat story stars the Crimson Dynamo, the Black Panther, and the Human Torch.

Appearing in "No Place to Run"Edit

Synopsis for "No Place to Run"Edit

A glimpse into the minds of an ordinary couple, as they watch and react with worry to news reports of a super-powered fight near their home.

Retrieved from "https://heykidscomics.fandom.com/wiki/Marvel_Team-Up_Annual_Vol_1_7?oldid=1729112"
Community content is available under CC-BY-SA unless otherwise noted.