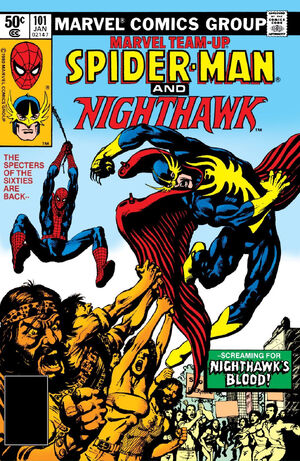 Appearing in "To Judge a Nighthawk!"Edit

Synopsis for "To Judge a Nighthawk!"Edit

Synopsis for "Don't Let the Sun Come Up on Me!"Edit

Following his adventure with Spider-Man, Nighthawk begins to wonder if he still has what it takes to be a hero. He decides to blow off some steam by firing his wing lasers at a building in the process of being demolished. This inadvertently puts a child in crutches at risk of being crushed by a collapsing wall.

The child trips and falls to the ground, prompting the horrified Nighthawk to come to the child's aid. Bracing the wall with his superior strength, Nighthawk orders the girl to crawl to safety, however her disability and low-self esteem prevent her from accomplishing the task. Things become more dire when the sun begins to rise, making Nighthawk's powers begin to wane, making it harder for him to hold up the wall.

Convincing the child to try harder, she manages to crawl clear just as the wall collapses on Nighthawk, burying him under tons of rubble. Having been saved by his reinforced wings, Nighthawk blasts himself free and checks to see if the child is okay. Seeing that she is, she thanks him for saving her life and he thanks her for reminding him of the merits of being a hero before flying off into the night sky.

Retrieved from "https://heykidscomics.fandom.com/wiki/Marvel_Team-Up_Vol_1_101?oldid=1628654"
Community content is available under CC-BY-SA unless otherwise noted.