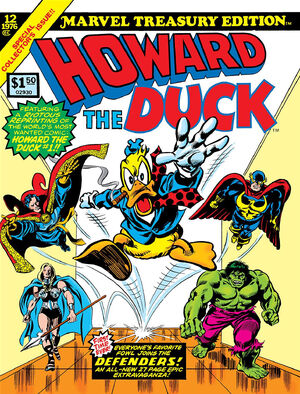 Appearing in "The Duck and the Defenders"Edit

Synopsis for "The Duck and the Defenders"Edit

A new group of super-villains called the Band of the Bland (villains who all share one thing in common: Not a single one has had an original thought ever.) have gathered together under the leadership of Dr. Angst, who suggests that they should get some big money job, and suggests that they assassinate presidential candidate Howard the Duck.

The next day, Howard and Beverly are kicked out of a hotel, and while looking for an old friend of Beverly's who lives in Greenwich village, they stumble upon Dr. Strange's Sanctum Sanctorum and meet the Defenders. Invited in by Dr. Strange who is intrigued by Howard, the whole group is attacked by the Band of the Banal who believe themselves powered up on an element called Prometheum.

Dr. Strange is struck down early in the battle and he transfers his mystic powers to Howard. Howard and the Defenders then battle the Band of the Banal until Dr. Strange can regain consciousness and reclaim his powers. Dr. Strange then easily finishes off the group, explains to them that Promethium was just a placebo and turns them over to the police.

Appearing in "The Way it All Began!"Edit

Synopsis for "The Way it All Began!"Edit

Reprints portions of Adventures into Fear #19 and Man-Thing #1 pertaining to the first appearance of Howard the Duck.

Appearing in "Know Your Candidate"Edit

Synopsis for "Know Your Candidate"Edit

Pin-Up of Howard the Duck and the Defenders.

Appearing in "Howard the Barbarian"Edit

Synopsis for "Howard the Barbarian"Edit

Reprinted from Howard the Duck #1

Retrieved from "https://heykidscomics.fandom.com/wiki/Marvel_Treasury_Edition_Vol_1_12?oldid=1445746"
Community content is available under CC-BY-SA unless otherwise noted.