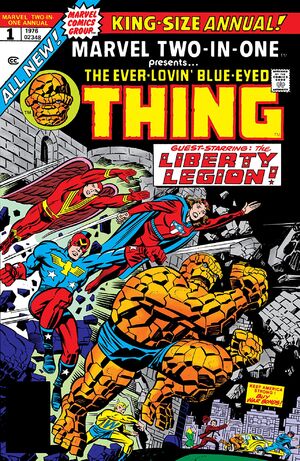 Appearing in "Their Name Is Legion!"Edit

Synopsis for "Their Name Is Legion!"Edit

Having just returned to the year 1942 with his comrades in the Fantastic Four having prevented the Nazi's from taking advantage of a cylinder of Vibranium that was accidentally sent back in time, Ben is before the Watcher and realizes their job is far from over. Having only recovered half of the Vibranium cylinder, Ben is determined to make the Watcher tell him what he needs to know. The Watcher is honour bound to not interfere with the affairs of humans and remains silent. When the other Fantastic Four realize what's going on, Ben bars them from Reed's lab determined to handle the problem by himself.

Going over the events that led up to this catastrophe, how he and the rest of the FF travelled back to 1942 and aided the Invaders in crushing Baron Zemo's weapons factory that was utilizing the time displaced Vibranium. As the World Trade Centre vanishes from existence, Ben realizes that the Vibranium cylinder must have been broken in half in the time stream and activates Dr. Doom's time machine before the the entire Baxter Building is erased from history as well.

He appears in the middle of New York City circa 1942, where he meets a young boy named John Romita. There even though he reveals that he is a human in an exo-suit he is accosted by the police who think that he is a Nazi spy. Angered again by being called a Nazi he attacks the officers when suddenly the fight is interrupted when air raid sirens go off. Off in the distance a battalion of Nazi Stukkas are crossing over the horizon much to Ben's surprise because as far as he knows history the Nazi's never attacked New York City. Young John recognizes one of the fighters as the one piloted by the Nazi known as the Skyshark, who is joined by the Japanese villain known as Slicer. Before Ben can act Jack Frost, Blue Diamond, Red Raven, Thin Man and Miss America of the Liberty Legion go into action to deal with the threat.

Ben climbs up on the Times Building, Ben attempts to use a flag pole to launch himself toward the action when he is stopped briefly by the Patriot and Whizzer, until he can identify himself as an ally from the future. As Ben is explaining things, the Liberty Legion members that are fighting the Stukka's destroy them all except for Skyshark's ship, who flees the scene, covering his escape with a smoke screen. With Skyshark making an escape, the Liberty Legion help Ben take his time machine some place safe. Unable to substantiate his story, the Liberty Legion decide to believe him for now, but leave him behind in order to track down the Skyshark.

The Skyshark meanwhile has landed at a secret Nazi's ship hidden in a cloud of mist off the shore of upstate New York, where he explains Slicer that he is the most feared fighter pilot Nazi Germany that Adolf Hitler had appointed him his current position.

Knowing that the US Military is developing new weapons for the war effort in upstate the Liberty Legion goes to investigate things. Miss America, Blue Diamond, and Whizzer go to a military site where a special new cockpit is being developed and clash with Master Man, who has come to capture it. Despite the Legion's best efforts, Master Man succeeds in capturing the cockpit. At another laboratory where a new jet engine is being developed, Jack Frost and Red Raven attempt to defend it from the Nazi backed Atlantean known as U-Man, their efforts also end in failure. Lastly, Thinman and the Patriot are flying to the site of a scientist who has developed a new gyro-scope. They arrive too late to prevent the Skyshark and Slicer from gunning down the scientist and taking what they require. After a brief dog fight, Skyshark manages to escape, prompting the Thinman and Patriot to head back to New York City to compare notes with their comrades.

In New York City, Ben finds the flag pole he attempted to use as a catapult finds that it can support his weight. Just then the Watcher appears leaving the Thing to wonder what's going to happen next: Next to his astonishment comes a giant flying Nazi ship in the shape of a Swastika. With the ship smashing through nearby high-rises Ben launches himself from the flag-pole looking to smash the device.

Retrieved from "https://heykidscomics.fandom.com/wiki/Marvel_Two-In-One_Annual_Vol_1_1?oldid=1649711"
Community content is available under CC-BY-SA unless otherwise noted.