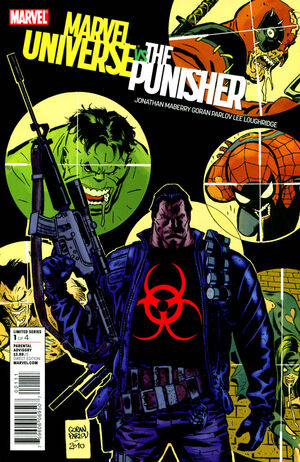 Appearing in "Last Gun on Earth"Edit

Synopsis for "Last Gun on Earth"Edit

In this world, the Punisher ekes out a life in a post-Apocalyptic Earth in hunting down both superheroes and villains who have turned into cannibalistic savages. Among his opponents is Deadpool, whom Castle kills with a headshot. Having previously killed Deadpool numerous times due to his regenerating powers, the Punisher cuts him into separate pieces and bury them far away from each other.

Four years ago, Spider-Man fought the Rhino which they brought their battle to Madison Square Garden during a hockey game. As the crowds cheered for Spider-Man, he suddenly and unexpectedly bites into Rhino's neck and declaring that the "meat is mine!" The Fantastic Four were immediately called in and subdued and imprisoned the Web-Crawler at the Baxter Building. After studying Spider-Man, Reed Richards reported his findings to the media in which he rules out Spider-Man as a sort of "zombie" (something similar to the Rage-infected in the movie 28 Days Later) as the superhero is infected with an unknown pathogen that retain his thinking, but disabling his higher reasoning functions. Turning and reducing him to a more primitive state - a cannibalistic predator. Immediately afterward, a similar event happened when The Blob entered a Chinese restaurant in Hoboken and ate everyone. And a day later a bus of school children went on a murder frenzy in a Nyack shopping mall. Soon more people were beginning to develop the same savage characteristic and eventually surfacing in the superhuman community. Scientists and the government were studying on what is causing this, but only led into dead ends. Inevitably within ten days, the virus had overrun America and eventually the world. Heroes who were uninfected, including the Punisher, had at first tried to capture and control the infected before finally deciding to kill them. Over time the heroes succumbed to the virus: The Thing formed a tribe in the shell of the Baxter Building and killed and ate numerous members of the superhero community before finally being killed by the Punisher; Susan Storm lasted longer, but ultimately euthanised her children; and Thor, who remained uninfected, killed Ares and Hercules before presumably returning to Asgard. Though there are still unheard pockets of survivors who are immune to the disease, but overall became easy victims to the cannibals.

By the present, the Punisher appears to be the only uninfected left in a near-deserted New York and lives in a well armed and fortified fairground in Central Park. By the next day, Frank continues his patrol in the city in his attempt to hunt down "Patient Zero", who rules parts of Manhattan. He finds a corpse of a man with signs of what appears to be an offering to the Punisher. Castle examines the body and finds him to be uninfected. This left him wondering of how he survive from becoming like the infected.

In a flashback, the Punisher narrated that before the pandemic he overheard of a weapons dealing from the Red Mafia. Suggesting that they are selling a portable "suitcase nuke". Castle finds the place of the transaction at a warehouse dock and gun down the thugs. He made sure that he avoid shooting the suitcase, but reveals to be empty. Unfortunately instead, the members of the Red Mafia had its contents in their pockets and Castle inadvertently released the vials containing an unknown substance and exposing it to Castle. This substance, known as Survivor 118, is a kind of gene therapy bonded to a pathogen that could be generally released through water of in the air. It was supposed to alter the basic chemistry of the body to allow survivors of a contaminated environment to breathe polluted air and to eat just about anything - from meat to cardboard - just to stay alive. Subsequently Castle absorbed too much of the substance and gaining an immunity. However, the released chemicals of Survivor 118 spread throughout the general population and then the entire world. This was noticed by the science community and furious argued as they weren't sure on what it could do and what the risks that its creators had expected. Ultimately, Survivor 188 was revealed to be the catalyst of the cannibal pandemic as the first signs that happened earlier among the early infected before Spider-Man were ignorantly ruled out for other causes before finally realizing the pattern.

The Punisher reflects back at the 'offering' left by Patient Zero, as he wants Castle to know that there are other survivors. Castle also acknowledge his own revelation that he is the direct cause for unleashing the virus and now must atone his gravest mistake in saving what is left of the world.

Retrieved from "https://heykidscomics.fandom.com/wiki/Marvel_Universe_Vs._The_Punisher_Vol_1_1?oldid=1445902"
Community content is available under CC-BY-SA unless otherwise noted.