Marvel Universe Vs. The Punisher Vol 1 2 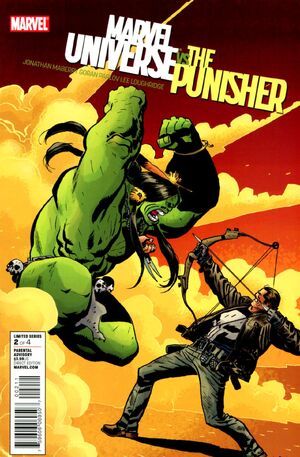 Appearing in "Warrior of Heaven"Edit

Synopsis for "Warrior of Heaven"Edit

The Punisher fights against a infected and savage Hulk, who in the past fought and killed Wolverine. Castle's guns are ineffective against the gamma-radiated cannibal; however, after keeping a safe distance between him and the Hulk, he arms himself with a bow and arrow, which is made from the tip of one of Wolverine's adamantium claws. The Punisher fires the arrow straight into Hulk's right eye which punctured through his head, killing him. As Castle looks over his kill, he hears a distant cry for help. The Punisher races to where it coming from, despite the fact it could be a trap but recognizes the voice as human. He finds the source at a church to find a priest and a young boy in a stone pit. Both of whom are uninfected. Castle lowers a rope down for them to climb up, and is attacked by Venom. Fortunately, Castle drops Venom's guard and fires a pulse pistol (which had belong to a Skrull he previously killed) at Venom's head, killing him and as well destroying his entire head. The priest and the boy gratefully thanks Castle for saving them, but their cries only alerted more cannibals. The three run for the entrance before Castle throws a grenade at the approaching cannibals.

Sometime later, Castle, the priest, and the boy walk back to Castle's hideout. On the way, Castle stops at Madison Square Park to find a grave that belong to a piece of Deadpool is unearthed by someone. Which means he has to kill Deadpool again. As the trio continue their journey, the priest tells his tale to Castle during the pandemic. He used to ran a soup kitchen in the Bronx where he helped people who were out of work due to the economic troubles until the infected attacked. He had been kept moving, trying to help and save as many people he can from the cannibals. However, this often prove fruitless as some of the people he rescued succumbed to the virus and was forced to kill them. By then he and the boy were only left after the others were either killed, turned, or vanished to places unknown. Despite everything that happened, he still maintain his faith and believe that the Punisher's untimely arrival is a miracle. Castle callously disregard this as being pure luck. The priest insistently refuse to accept until he (and the boy) are horrified to see the Punisher's handiwork of the staked heads of the infected heroes and villains he previously killed.

That night, the priest talks over with Castle in regarding that there are more survivors hiding from not just the cannibals but Castle himself. When Castle question this, the priest reflect the fact that before the outbreak Castle was already frightening to everyone. And that his actions are not so different from the cannibals. The priest further tells that personally he doesn't see Castle as "fighting the good fight". In which part of him applauds him for killing the cannibals, and hopes to kill them all. But the other part of him believe that the killings is consider self-defense and, at worst a simple reaction to his environment. But saving the last uninfected people would give meaning, and fill his life with a purpose. The Punisher only answers that his actions since the outbreak already gives him a purpose. The moment is interrupted by Deadpool who calls out to Castle. The Punisher urges the priest to stay with the boy before arming himself to confront Deadpool.

Deadpool tries to tell Castle that he came for a truce but is repeatedly shot by him. After Castle pins down Deadpool, the later insists that the reason he came is to tell him that there are more survivors. Castle have Deadpool crucify to a board and interrogates him. Deadpool reveals that "Patient Zero" knows the whereabouts of the survivors who are still in hiding. Castle demands him why he needs to hear this. Deadpool replies that Zero wants to talk with him, which earns a doubtful Castle in considering why he wants to meet Zero; however, Deadpool corrects that Zero want to meet him and is already here. Castle returns back inside his safe house and finds the priest and the boy being held hostage by Patient Zero - Spider-Man.