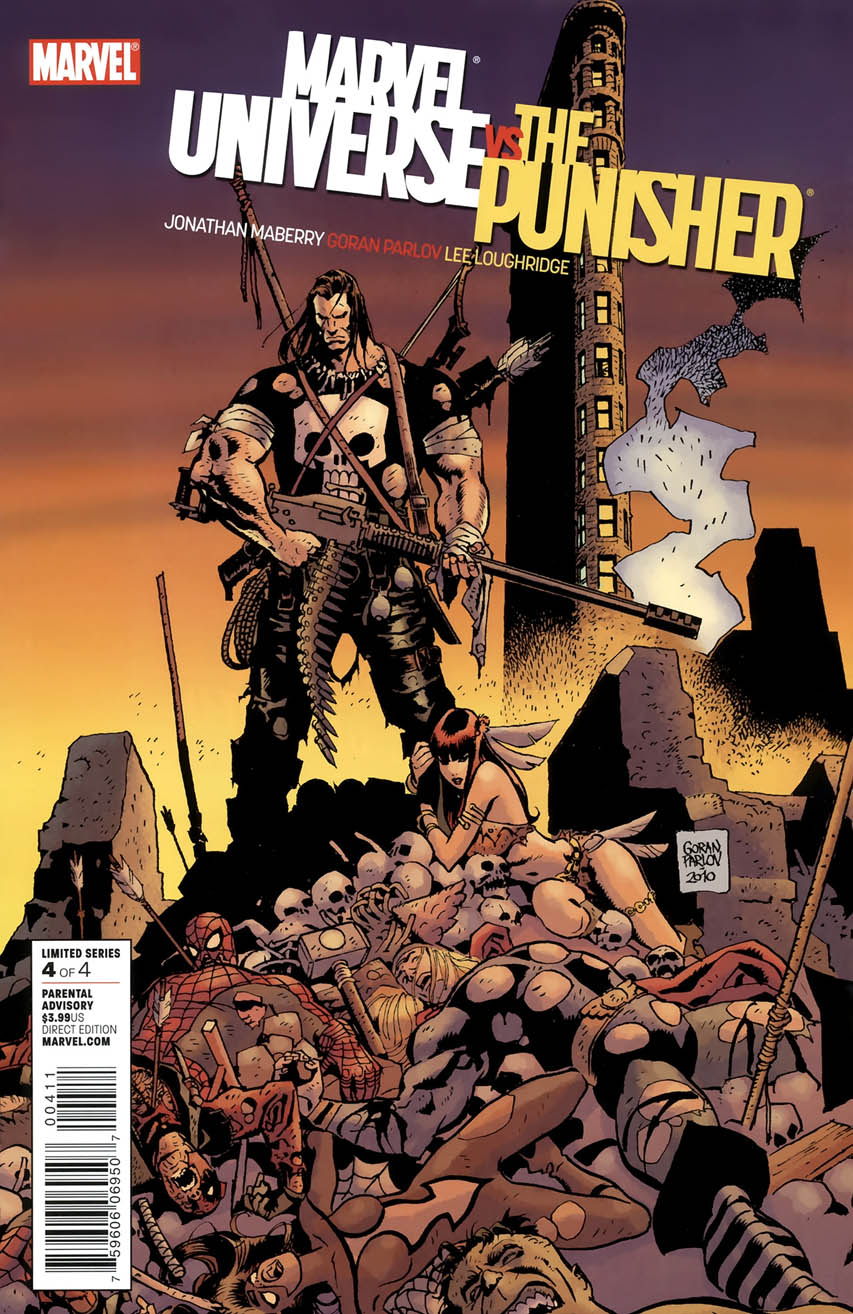 Frank Castle is overpowered and beaten by the King of Fear, formerly known as The Kingpin; however, Frank distracts him by throwing a knife at him before employing flash bang grenades, blinding the cannibals and allowing the survivors to run. But Castle is jumped by Sauron and is knocked out after being slammed into a wall. He is then strapped down and interrogated by the King of Fear, who acknowledges that Castle is sent to rescue Mary Jane Watson and demands to know the whereabouts of Spider-Man's tribe. Frank refuses which has the King of Fear and his followers gladly torture him. Throughout his painful ordeal, Castle flashes back to his origins from the loss of his family, his birth as the Punisher, and finally to his indirect cause for the world's condition that he has to atone.

Meanwhile, the priest and the boy were becoming very concerned of Frank's long absence, and, knowing that he is in trouble, haphazardly armed themselves with some of Castle's weapons and traveled to where the King of Fear is but are immediately captured by the Multiple Man, and interned with the other survivors.

After constantly torturing Castle, the King of Fear decides to have Mary Jane and her unborn child's lives threatened to coerce Frank. Mary Jane elbowed her captor, Tombstone, and stole his knife, stating that she will take her and her child's lives from revealing anything. At that moment, a still alive Deadpool is imprisoned and guarded by the Red Skull. He continues to talk and annoys the Red Skull, who comes over to the cell and threatens Deadpool to be silent. Deadpool anticipated this, and pierces Red Skull's neck with his hand.

The King of Fear goads Mary Jane to either give him the knife or kill herself as he and the others will eat her and her unborn child's corpses, which intimidated her for the King to grab the knife back. Deadpool, who now carries a bag of Castle's weapons that was brought by the priest, secretly watches over as he tries to think of what he should do. As he thinks this, Tombstone sneaks behind and is kicked in the groin by Deadpool. The former mercenary throws down the bag of weapons in front of Mary Jane and drops Tombstone onto Iceman before leaping into attacking the King of Fear and his cannibals. Mary Jane quickly grabs a knife from the bag and frees Castle, who then arms himself and begins to mow down the stunned cannibals (including Deadpool). The King of Fear is left barely alive, who asks Castle if he is planning to make him beg in which Castle then kills him with an instant headshot.

Moments later, Mary Jane is joyfully reunited with Spider-Man along with Castle and the rest of the survivors. Mary Jane thanks Castle for saving everyone and for misjudging him, but he suddenly pushes her away and pulls out a pistol on Spider-Man. The priest tries to stop this as Castle gave his word to Spider-Man. Castle, in turn, replies that he would rescue the survivors and only gave his word to the priest before killing Spider-Man as Mary Jane holds him in her arms in anguish. The priest angrily demands Castle as to why he did this, in which Castle answers that he doesn't make deals with monsters. In which the priest coldly retorts that he only sees one monster.

In the aftermath, 68 survivors were found in total, including Mary Jane, and are sent away from Manhattan by the Punisher. Castle watches them paddling away from the island on rafts as he internally states that Manhattan isn't meant for the weak, to be healed, and for killers; but for monsters, as he heads back into the city to continue his battle.

Retrieved from "https://heykidscomics.fandom.com/wiki/Marvel_Universe_Vs._The_Punisher_Vol_1_4?oldid=1445905"
Community content is available under CC-BY-SA unless otherwise noted.