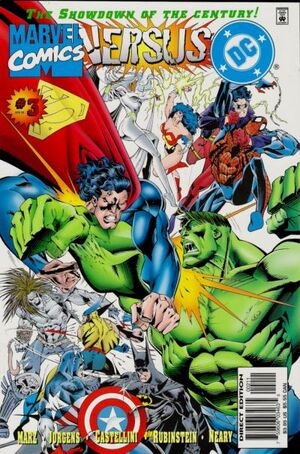 THE MAIN EVENT IN THE BRAWL FOR IT ALL! Hulk vs. Superman! Batman vs. Captain America! Storm vs. Wonder Woman! Superboy vs. Spider-Man! Wolverine vs. Lobo! The outcome of these battles determines the fate of the top two universes in all of comicdom! And best of all— YOU PICK THE WINNERS! Plus an industry first: birth of a super-hero—jointly owned and created by both Marvel and DC who will impact the continuity of both universes!

This issue is reprinted in DC Versus Marvel Comics.

Retrieved from "https://heykidscomics.fandom.com/wiki/Marvel_Versus_DC_Vol_1_3?oldid=1730326"
Community content is available under CC-BY-SA unless otherwise noted.