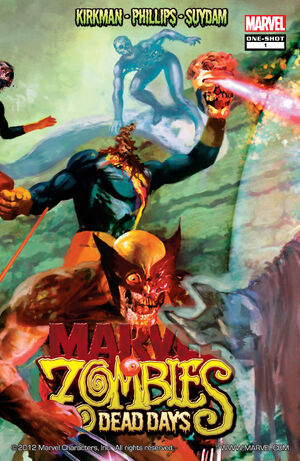 Kill or be killed is the new rule--and it is the only rule that matters.

Spider-Man reaches Mary Jane and Aunt May to find them safe and sound. When questioned about the current situation, Peter confesses to being bit by Colonel America. Peter then is taken over by the virus and attacks Mary Jane as Aunt May runs into the room in dismay.

As the battle between infected heroes and non-infected rages on, Magneto, on-board Asteroid M, feels sorry for bringing the virus to Earth and returns to the planet to help. Nova arrives at the Parker flat to find the zombified Spider-Man and tries to reason with him. At that point Daredevil shows up to explain to Nova what is going on, and that the rules have changed, but becomes infected by Zombie Peter in the process.

Meanwhile Zombie Colonel America has a moment of clarification and heads to the Avengers Mansion to try to find a cure for the virus. At the Xavier Institute Storm, Cyclops, Wolverine, and Colossus try to fend off the newly mutated mutants (including Sasquatch) to protect the surviving students in the mansion. Magneto shows up and recruits the X-Men to work with him in fighting the zombified heroes.

Aiming to find a cure, Giant Man and Black Panther make their way to Pym's Lab when Black Panther figures out Pym was bitten. In an effort to avoid scrambling for food, Pym knocks out Panther to save him the trouble of searching for food when the infection spreads.

As the battle rages on, Sue Richards, Reed Richards, The Thing, and Johnny Storm mourn the death of Franklin and Valeria Richards at the hands of She-Hulk, who has been infected. As Sue kills Zombie She-Hulk, there is an incoming transmission from Nick Fury.

Back in the heat of battle, Thor fights against his previous allies including a zombified Giant Man. Nova shows up to help Thor in the brawl. Then the Fantastic Four arrive in their Fantasticar to lead Thor and Nova to the S.H.I.E.L.D Helicarrier where Nick Fury is calling all remaining superheroes, and villains, together.

Nick Fury informs all that the epicenter of the infection was Manhattan. The Avengers were first on the scene and as such first to be infected. Nick Fury puts Iron Man, Bruce Banner, and Mr. Fantastic into researching a cure for the contagion. Fury then assigns everyone else to go out and rescue who they can.

Pym arrives back at the Avengers mansion, infected and looking for a new snack in Jarvis. Realizing the other Avengers have beaten him to it, the Zombie Avengers talk about their resolution to give up the fight.

Dr. Doom watches the ongoing fight from his secure fortress at Latveria and refuses to aid Fury in his plans.

Back on the Helicarrier Reed Richards is busy researching a zombie. Sue walks in asking why he is not helping Stark and Banner with their research for a cure. The Richards then get in a fight over Reed's thoughts that the zombies are like advanced lifeforms.

Fury checks on Stark who has decided to build a machine that will teleport them to an alternate dimension similar to their own. Stark hopes to have the machine operational as soon as possible.

Back on the planet the uninfected are losing the fight against the Marvel Zombies and have decided to retreat back to the Helicarrier.

Reed has called the rest of the Fantastic Four to his lab to discuss his findings. Reed believes that the infection is evolution and as such has infected the team. Reed then allows them to feed on him and in turn infect him.

Just as Stark finishes the machine, the Zombified Four bust in to the room and infect him. Fury grabs the machine and pulls it into a small room where some of the last remaining heroes have gathered. Fury commands Thor to destroy the machine and for this the zombies killed him.

When asked what will happen next, Zombie Reed responds to rebuild the machine and, "spread the gospel."

Retrieved from "https://heykidscomics.fandom.com/wiki/Marvel_Zombies_-_Dead_Days_Vol_1_1?oldid=1445939"
Community content is available under CC-BY-SA unless otherwise noted.