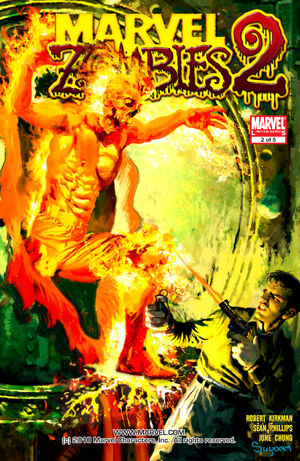 I've been traveling out in space for forty years-- eating and killing, devouring everything in sight... only to learn I'd be coming back here, to Earth... a place where I can't hide what I once was-- can't forget it, the evidence is right here-- all around us. We were heroes. And we return to find living people here! With families! We can't do this again! We just can't! I won't let you!

On their trek back to Earth, Giant Man became annoyed by Spider-Man and tried to kill him, but was stopped by Iron Man and Hulk. He remarked that he doesn't understand why Spider-Man lived but Colonel America died.

On Earth, K'Shamba was sitting outside the cell where his grandfather, T'Challa, and Wasp were being held after devouring an assassin that nearly killed T'Challa. Malcolm Cortez attempted to seize power over their group by using T'Challa's new status as a zombie against him.

On their way to Earth, Spider-Man revealed to Luke Cage that the reason he told jokes was originally to hide his fear of losing the fights, but lately he began using them to keep his mind off of all the evil things he had done, preventing him from becoming another soulless beast without remorse.

Forge revealed Malcolm's plan and the plot to kill Wasp and T'Challa to "get rid of the zombie plague" to them. That night, Reynolds, Hawkeye, and Forge freed T'Challa and Wasp to get them out of New Wakanda before Malcolm had his way, but they are intercepted by Malcolm and the villagers. Malcolm revealed what T'Challa has become to the villagers to cause them to fear him, but the villagers were distracted, staring at the newly arrived Intergalactic Zombies.

The zombies attacked, and Forge tried to send as many survivors as possible to Asteroid M. The Hulk went on a rampage, devouring a few people before being stopped by Giant Man, who said that there weren't enough people to eat them all mindlessly. He proposed that they start up a breeding program, which would then give them enough food to last them forever. At this, Spider-Man blasts off the top half of Giant Man's head, (similar to Colonel America's wound), explaining that if they were to set up a breeding camp, they'd be no better than the monsters they fought all those years ago. At the end of his speech about heroism, Giant Man ordered Spider-Man to be killed. Wolverine is glad to step in, but Luke Cage and Spider-Man fought him and Iron Man off while Wasp and T'Challa rescued the final villagers. Reynolds had T'Challa push the zombies back out of New Wakanda, then setting off a force field to keep them out. Sadly, Gladiator and a sleeping Hulk were locked inside with the survivors, and Luke Cage is cut in half.

Retrieved from "https://heykidscomics.fandom.com/wiki/Marvel_Zombies_2_Vol_1_2?oldid=1445941"
Community content is available under CC-BY-SA unless otherwise noted.