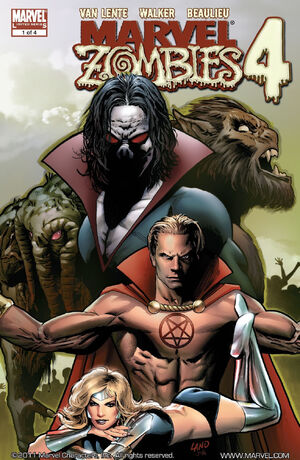 This looks like a job for... The Merc with only a Mouth! No guns! No healing factor! No limbs! NO PROBLEM!!!

Simon Garth escaped A.R.M.O.R.'s HQ along with Zombie Deadpool's head. They teleported to the bottom of the sea, where they met the Men-Fish, and spread the Zombie contagion to them. The Men-Fish attacked the S. S. Tranquility, killing most of the crew, and the new team, The Midnight Sons, were called in to track the virus and cure it. While they deal with a zombified Piranha, Garth and Wilson continue on their way, meeting up with Black Talon, who immediately sees the zombie virus as a marketable weapon to deal to some of his criminal friends, namely, The Hood.

Retrieved from "https://heykidscomics.fandom.com/wiki/Marvel_Zombies_4_Vol_1_1?oldid=1445949"
Community content is available under CC-BY-SA unless otherwise noted.