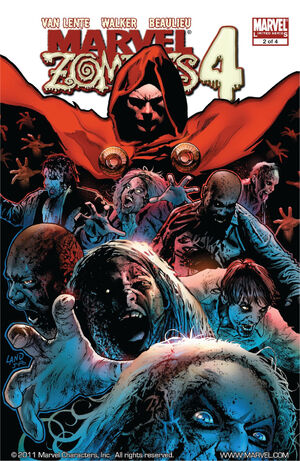 The cruise ship containing the zombified Men-Fish runs aground on Taino, home of Black Talon. Jennifer Kale teleports the Midnight Sons to the island, as Hellstrom destroys the ship by igniting the engines.

Meanwhile, the Hood confers with his cohorts Crossfire and Mandrill about Black Talon's offer of the zombie virus. Hood's cohorts analyze the dangers of possessing a zombie virus and strongly profess Hood to reject Talon's offer than having "Armageddon for bad business." However, Dormammu mentally commands the Hood to get the virus.

The Hood goes to the Black Talon's plantation on Taino, with the Night Shift. Dormammu warns the Hood that the Midnight Sons are approaching, sending himself and the Night Shift to battle the Sons. As this is happening, the Zombie Deadpool bit one of Black Talon's henchmen, causing a outbreak in which Garth the Zombie escapes with Deadpool. Morbius attacks the zombies with his explosive vaccine, but it mutates into something deadlier, killing Hood's henchmen. The vaccine instead causes the virus to be airborne. Dormammu answers Kale's call for help by offering her great power.

Retrieved from "https://heykidscomics.fandom.com/wiki/Marvel_Zombies_4_Vol_1_2?oldid=1445950"
Community content is available under CC-BY-SA unless otherwise noted.