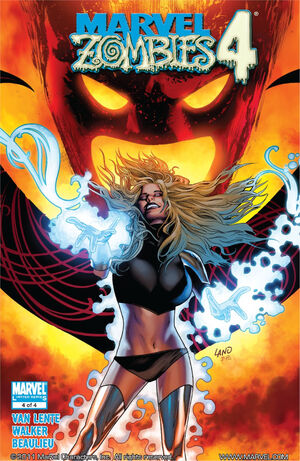 The Midnight Sons battle against the terrifying new mutation of the zombie virus side-by-side with...The Hood! Why does the trigger-happy Cabal member now fight for humanity? Could it have anything to do with the fact the dread Dormammu has abandoned him for a new, even more powerful minion? Or the frightening fact that the plague of undead is going to lay waste to the entire Marvel Universe?

Retrieved from "https://heykidscomics.fandom.com/wiki/Marvel_Zombies_4_Vol_1_4?oldid=1727040"
Community content is available under CC-BY-SA unless otherwise noted.