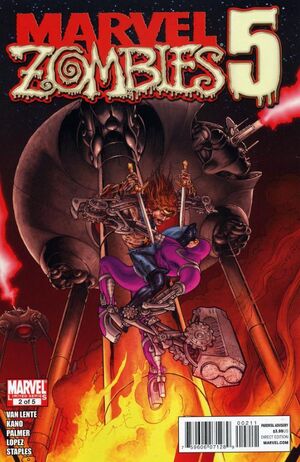 By God, Old Skull, we've DONE it! ZOMBIES HAVE SAVED THE EARTH!

Appearing in "The Humblest Things"Edit

Synopsis for "The Humblest Things"Edit

A week ago, Howard the Duck, an agent of A.R.M.O.R., is sent to find Machine Man in Milwaukee. There he finds a drunken Machine Man, who is greatly depress in motor oil because of Jocasta for leaving to her "ex-husband" (Ultron). Howard explains to Machine Man that he is assigned on a new mission from Michael Morbius that he had find a cure for the zombie virus thanks to Spider-Man's radioactive blood. However, the zombie virus is so virulent and metamorphic it's nearly impossible to lock down its genetic code. But according to A.R.M.O.R. forecasters, that a Planestorm will merge several alternate realities together, which all are afflicted with a variation of the zombie virus. In so, Morbius assigned Howard and Machine Man in bringing back the variants of the zombie virus from each kind of the undead. And comparing them together would allow Morbius to unlock the virus' genetic code and find a cure.

In the present, Machine Man, Howard, and their new ally Jackie Kane (who goes by her alias Swift Cloud) are tasked in finding a "Boyle" virus in Earth-691. A world where H.G. Wells' Martian invasion novel War of the Worlds is fact, and that Earth in the year 2020 is already conquered by the Martians. The three saved Carmilla Frost and her baby from a Martian Tripod piloted by a Skar unit. After crippling the Tripod and destroying the android, Machine Man is attacked by Killraven and his Freemen, M'Shulla Scott and Old Skull, who they mistake Machine Man and his companions as "Martian Mutates". Fortunately, Carmilla defended the three and explains to her husband M'Shulla and the others that the three saved her and her son. Despite the resolution, Killraven is not apologetic who then explained to Swift Cloud and Howard of his world's grim and dire situation under the tyranny of the Martian Masters.

That night, Killraven and his companions learned from Howard and Jackie of their mission in finding the Boyle virus. When Howard explains of Machine Man of keeping a sample from Earth-483 and that he is becoming more suicidal, Carmilla is interest in this and whisper something to Killraven.

Meanwhile, Killraven approach Machine Man, who is repairing himself from his encounter with Killraven. He explains to Machine Man that being an empath, he can tell Machine Man's feelings and knows that he lost his purpose in life. Though he also knows that he is a hero at heart, and propose an offer that deserve him a "hero's death."

The next morning, Swift Cloud and Howard are awaken to explosions coming from the Martian Masters' headquarters, follow after by Black Smokes. Carmilla, M'Shulla and their baby have already left safely, and Jackie noticed that Machine Man is gone. She demanded Killraven as to what happened to him but are cut short by the arrival of zombie pregnant human slaves. As they fight off the zombies, Killraven explains to Jackie that he had just simply "poisoned the enemy's food supply." After Old Skull was bitten at the arm and had to be amputated, Jackie again demands to Killraven what he done to Machine Man. He reveals that the night before, he necessarily used Machine Man to be captured by the Martians where he will be taken to Alteration Division in which Killraven then mentally control the Martian Sacrificer to use Machine Man's virus and crossbred with microbes to be release in the facility. Despite infecting the human prisoners, it was the best Killraven had to destroying the Martians. Soon then they are attacked by zombie babies from the zombie pregnant women, in which they immediately dispatched. Following this, Jackie and Howard are determined to find Machine Man with Killraven having to escort Old Skull back to camp for medical need. Just then, Killraven picks up the Martian Masters' mental broadcast and learns that the Martians had calculated the spread of the zombie virus and decided to leave Earth for being unsuitable. Joyfully making Killraven's plans and dreams to come in fruition.

In the facility, Jackie and Howard are swarmed by the numbers of zombies as they are running out of ammo. However, they are then save by Machine Man, who has connect himself to a Tripod and begins to slaughter the zombies. He tells to Howard and Jackie that while on the operating table he heard them looking for him, in which it fulfilled him that he is still care for.

Retrieved from "https://heykidscomics.fandom.com/wiki/Marvel_Zombies_5_Vol_1_2?oldid=1445954"
Community content is available under CC-BY-SA unless otherwise noted.