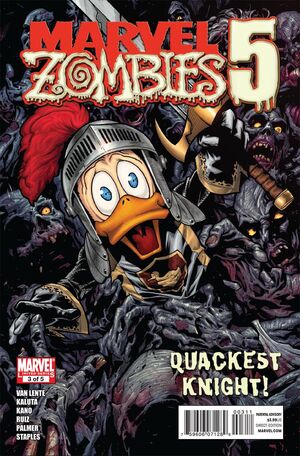 Setting during the period of King Arthur of Earth-555, it has been the third year that the Knights of Round Table had been searching on their quest of the Holy Grail. Among those knights is Sir Percy of Scandia, the Black Knight, rode through an pagan-enriched Isle of Wight to find a tower. The Black Knight is the son of Sir Dandel, a pious converted Christian, and Lady Evaine, a pagan. At the current time, the English kingdom is at civil war between Christianity and Celtic-Saxon paganism. Which Sir Percy hoped that finding the Grail would be the final victory of the "Faith of Rome" that would end the bloodshed.

At the castle, the Dark Knight is met by a damsel in distress who request his help in freeing her home from dark magics. Which he obliged. As he enters into the castle, the "maiden" is reveal to be a ghoul. Inside, Percy is allure to the source of the dark magic, the infernal gospel tome of the demon Chthon, the Darkhold. The tome tempted the Dark Knight claiming that the solution to the division in Arthur's kingdom and his divided soul rest inside it. Percy believed it and allowing himself to spread the Darkhold's influence beyond allowing the dead, who are intelligent, to walk and attack and killed the living.

The army of the Darkhold had grown to hundreds and more as they besiege Carisbrooke Castle. The army spot the appearance of Howard the Duck, Jackie Kane, and Machine Man (who is still installed to the Martian tripod). The undead attack the tripod with siege engines, one of which a ghoul attach itself to a arrow and slams into one of the tripod's legs, crippling it. Fortunately, Howard, Jackie and Machine Man direct the tripod onto the undead's siege tower and jump inside Carisbrooke Castle. The three are then surrounded by soldiers led by Lord Admiral Gervase, who is sworn to King Arthur in purging paganism throughout the kingdom. He mistakenly sees Howard as a pagan creature and order him to be put to death. However, Jackie, with her speed, hold Gervase at sword-point, convincing him that their mission is to help and find to destroy the source of the undead (known as "Possessed Type-834", a "Raimi") in exchange for the resources in repairing Machine Man. Which Jackie decided to volunteer herself in finding the source of the outbreak as her speed can get through the zombie horde.

After dressing into a medieval attire and arming herself, Jackie speeds out and slashes her way through. Once outside, she is able to track the undead source at the castle where Sir Percy is. As she comes into the tower to find the Black Knight, the Darkhold tries to sway her in having her parents back. Jackie refuses and uses the Black Knight's Ebony Blade and drives it into the Darkhold, destroying the book and purifying the evil, thus ending the undead threat. Jackie helps the freed Dark Knight outside.

Later, Machine Man is repaired at a inferior level and complains to Howard if the next dimension would provide him the necessary needs. Howard confirms that the next world, Earth-8410, is a "Dystopia Cyberpunk" which would provide him the technology. Howard then notice on the monitor and privately share this to Jackie, showing an alternate Jocasta which he fears this might not end well for Machine Man. As the trio left Carisbrooke Castle, Admiral Gervase is about to proceed his purge but is very shortly confronted by the Norse god Thor, who had heard the plight of his worshipers and prepares to shows his wrath.

Retrieved from "https://heykidscomics.fandom.com/wiki/Marvel_Zombies_5_Vol_1_3?oldid=1445955"
Community content is available under CC-BY-SA unless otherwise noted.