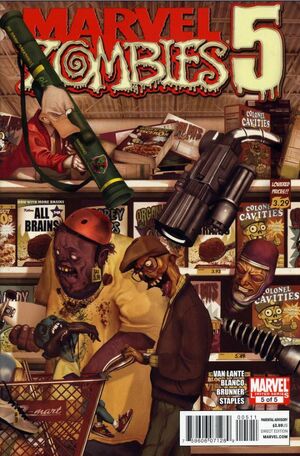 That's what I love about you hairless apes...you never let facts get in the way of a good story.

Appearing in "A Plague of One"Edit

This is it, the nail- (and finger-) biting conclusion! Machine Man and friends are poised to collect the last zombie sample they need to create a cure for the plague of the flesh-eaters, but first that requires entering the most horrifying universe of all... ours! And with ARMOR agents hot on their heels to stop their illegal mission, have our intrepid zombie-hunters bagged their last brain-muncher?

Retrieved from "https://heykidscomics.fandom.com/wiki/Marvel_Zombies_5_Vol_1_5?oldid=1445957"
Community content is available under CC-BY-SA unless otherwise noted.