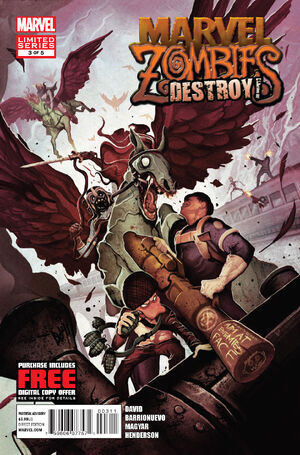 Stop thy caterwauling, woman. The sound is offensive to mine ears. In any event, these particular zombies were not after you. They were after me. They, and countless slavering Asgardian hordes to come. Gods made into demons, driven by insatiable hunger, hounding me...and now you...wherever we run.

Appearing in "A World Upside Down"Edit

Synopsis for "A World Upside Down"Edit

Zombie Dum Dum Dugan and Bucky are searching for Zephyr Zog. Zombie Dugan sees Dugan hanging from the rope. Howard accidently drops him, but he is caught by Libertas and the three of them fly to the rest of the group. After they meet up with them, Dugan chokes Howard, angry that he used him.

Onboard Zog's train, Howard explains to Dugan that he needed him so that they could get into the zombie's headquarters by pretending to be zombie Dugan and shut down their defense systems. Dugan is still mad despite his explanation because he thinks no man should see himself that way.

Battlestar asks Eternal Brain about how he came to be Eternal Brain. He tells him that he was an Eternal with enemies, so he hid as a human. But he was eventually found and killed. However, his Eternal brain lived on. After their conversation, Miss America asks Battlestar if he knows where Columbia is.

In the back of the train, Taxi is moping by herself. Columbia and Riveter find her and ask her what's wrong. She tells them she feels horrible about Red Raven, especially since she was always insulting him. As they comfort her, Columbia wonders about a green trunk that's in the middle of the room. Though they find nothing inside, Columbia still feels something is wrong and goes to check on Zephyr Zog and Flexo, who are controlling the train.

All of a sudden, zombie Valkyrie bursts in and pins Flexo down with her spear while she eats both of Zog's eyes and flies out with Zog. Columbia returns to the group and alerts them about the situation. Soon after, she throws Zog's head into the boxcar and takes Taxi and flies away with the rest of the Valkyries.

Columbia comes to her rescue and brings her horse down by cutting its wing. Taxi is dropped, but she is saved by Eternal Brain, who uses his telekinetic powers to bring her back into the train safely.

Meanwhile, Columbia and Valkyrie engage in a sword fight, aided by Blazing Skull, who, from the boxcar, fires a burst of flame at the other Valkyries from beneath them. This distracts Valkyrie long enough for Columbia to behead her, but she is bitten in the process. Wanting to die on her own terms, Columbia allows herself to collide with a train tunnel.

What remains of the group grieve their loses when Loki suddenly appears before them, saying that these zombies were after him and that he is to blame for the zombie outbreak.

An unlikely ally joins our heroes, the same mysterious force who caused the zombie plague!
A daring raid into the very hearty of the zombie Red Skull’s territory!

Retrieved from "https://heykidscomics.fandom.com/wiki/Marvel_Zombies_Destroy!_Vol_1_3?oldid=1445960"
Community content is available under CC-BY-SA unless otherwise noted.