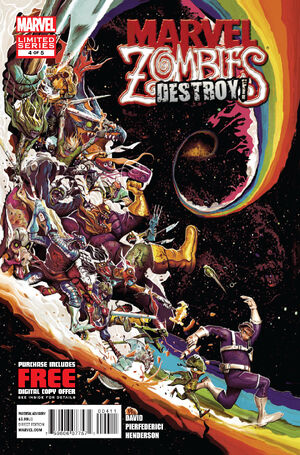 History is made at night! Character is what you are in the dark! The remainder of our troops are gathering even now! We will then load our battleship and break through the dimensional barrier! World after world will fall prey to our hunger! We must strike while the clock is ticking!

Appearing in "Into the Belly of the Beasts"Edit

Synopsis for "Into the Belly of the Beasts"Edit

Loki explains to the rest of the Ducky Dozen how he is to blame for the zombie outbreak and why he is being pursued by undead Asgardians: Odin had forbidden the Asgardians from having anything to do with humans. Knowing how Thor thought felt about mortals, Loki went to Earth in disguise and started the zombie plague. He hoped that Thor would either watch in horror as the mortals ate themselves or he would travel to Earth and face punishment. Instead, Odin took matters into his own hands and went to investigate the cause of the outbreak. But he needed the Odinsleep and was weak enough to be bitten by zombie Namor. And because the power of all Asgardians flows through him, every Asgardian turned into a zombie, save for Loki, who is a Frost Giant. Now allied with the Nazis, the Asgardians are searching for Loki so that they can either make him one of them or eat him.

Loki wants to ally himself with the Ducky Dozen because he thinks the only way to fix things is by getting the Death Spore Flower, which is heavily guarded at the zombies' base. Flexo informs them that several Asgardians are waiting for them up ahead. Loki's magic has allowed him to stay hidden but using a spell that will get them to safety would alert the Asgardians to his location. As the train gets closer, Thor crashes it with his hammer and orders the others to search the train, but they find nothing. After they depart, the Ducky Dozen emerges from the green trunk, but Loki has left them.

Dugan, disguised as his zombie self, infiltrates the Nazis' headquarters. Inside, he contacts Battlestar, who informs him of the rest of the plan. Dugan is to head to the back and open the rear gate, which the Ducky Dozen will come in through and strike the enemy. Also, he mentions that there is a secret storage facility, which Dugan finds with ease. But before he can continue with the plan, zombie Arnim Zola and Baron von Strucker take him to a Red Skull rally.

Meanwhile, in the woods, the Ducky Dozen are surprised by Balder and Executioner, resulting in Dragoon getting bitten. Blazing Skull and Miss America defeat the Asgardians while Battlestar decapitates the zombified Dragoon. As they are surrounded by more zombie Asgardians, Eternal Brain decides to use his powers to open the gate since Dugan hasn't opened it yet. Soon, the gate is opened and the Ducky Dozen enter, closing it shut behind them. There, they find the Nazis' weapon, two large zombie goats.

Retrieved from "https://heykidscomics.fandom.com/wiki/Marvel_Zombies_Destroy!_Vol_1_4?oldid=1445961"
Community content is available under CC-BY-SA unless otherwise noted.