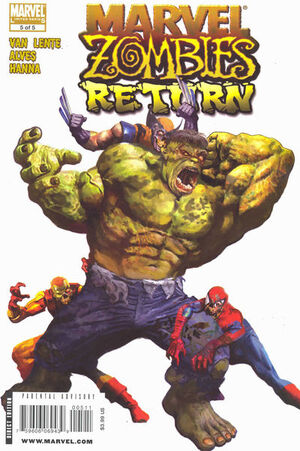 Appearing in "The Avengers Dismembered"Edit

MARVEL ZOMBIES 3 & 4 scribe Fred Van Lente returns to deliver the apocalyptic climax to this latest tale of terror! The cry goes out, from the four corners of the Earth, to every hero breaking ravenously into an orphanage, to every heroine desperately pursuing the last remaining survivors in a recently-uncovered bunker: "Avengers Dismember!" Will the fearsome flesh-eaters gain access to dimension-hopping technology that will make the entire multiverse their all-you-can-eat buffet? All that stands between them and their slaughter on infinite earths is the resurrected team of Earth's Moldiest Heroes! Who are the Zombie Avengers? What united them to fight for humanity instead of feast on it?

Retrieved from "https://heykidscomics.fandom.com/wiki/Marvel_Zombies_Return_Vol_1_5?oldid=1445967"
Community content is available under CC-BY-SA unless otherwise noted.