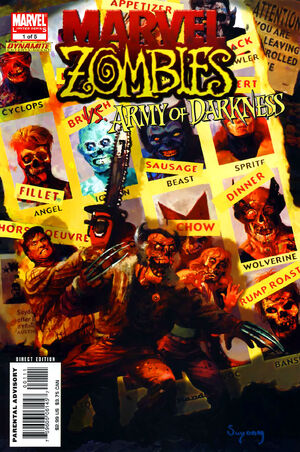 Ashley J. Williams finds himself in a different world. Dropped in an alternate reality New York City; only to be found in a dumpster in a dark alley. While coming to, he is approached by a homeless old woman only have an tin can thrown at her by Ash, followed by an apple core to the back of her head. After a quick realization that he is alive and well, he heads out of the alley only to see two men enthrawled in battle. The men being Daredevil and Thunderball. Ash eager to enter the battle and is stopped by the old homeless woman who is now possessed by the Necronomicon. She speaks of the inevitable death of this world he has come upon, and that there is nothing he can do. After the old woman is finished Ash interrupts her by punching her in the face knocking her to the ground.

He raises his chainsaw to kill her when Daredevil and Thunderball spot him. Dardevil throws his baton at Thunderball, then heads toward Ash and punches him in the face thinking him of being part of the Wrecking Crew. Meanwhile Ash is puzzled by the Daredevil's accusations. About to attack, the Daredevil is struck in the back by Thunderball's giant ball, knocking him into a wall where he is left unconcious. Ash thinking he did good parts ways with Thunderball. Ash looks at a newspaper though only to find out that he had helped an evildoer. This however does not phase him.

Next Ash is seen heading towards Avengers Mansion. When he approached the mansion's front gates he was asked to state his name and his nature of being there by a speaker. Being startled Ash shot the speaker with his shotgun. Only to be confronted by the Avengers themselves. Ash tries to warn the Avengers of the deadite threat that is coming, only to be ignored and laughed at, until Scarlet Witch teleports him to a pond. Ash looks at the city of New York only to realize it has begun. Purple lightning started so strike. Ash then starts to remember walking into a great light, being told his "boomstick" was not aloud, and then having his flashback end as he runs into the middle of the city, warning people of what is going to happen.

The Avengers come to the city and spot Ash trying to warn the people. They exit their ship and head toward him. Spider-Man comes and asks Colonel America if he needs any help. Captain America then has Spider-Man web up Ash and swing him out of there. While being swung away by Spider-Man, Ash tries to tell him of what is going to happen, and reverts back to the unfinished flashback. During the flashback he sees a deadite version of Sentry, feasting on a pile of humans. Ash shoots him in the chest and is then smacked by the zombie Sentry into the hole that had brought him there in the first place.

Spider-Man then asks what the person who did this looked like, only to have Ash show him. Sentry was attacking the Avengers. They had become deadites themselves and realized they wanted to feast. Hawkeye shot arrows at an unsuspecting victim, nailing him to the wall where Hawkeye then feasted on his head. After witnessing this Spider-Man swings closer still holding Ash to get the rest of the innocent people away from the now deceased Avengers. After dropping the rescued girl off some odd blocks away, Spider-Man is attacked and bit by Captain America. Leaving Ash to fall to the ground below still in his web cocoon. On the ground Ash is met by Luke Cage, Ms. Marvel, and Hawkeye, where Hawkeye calls dibs on Ash's brain.

The cover art for Marvel Zombies vs. Army of Darkness 1 is a parody of the cover of The Uncanny X-men #141 which began the Days of Future Past reality in 1981.

From Marvel Database, a Wikia wiki.
Retrieved from "https://heykidscomics.fandom.com/wiki/Marvel_Zombies_Vs._Army_of_Darkness_Vol_1_1?oldid=1445977"
Community content is available under CC-BY-SA unless otherwise noted.