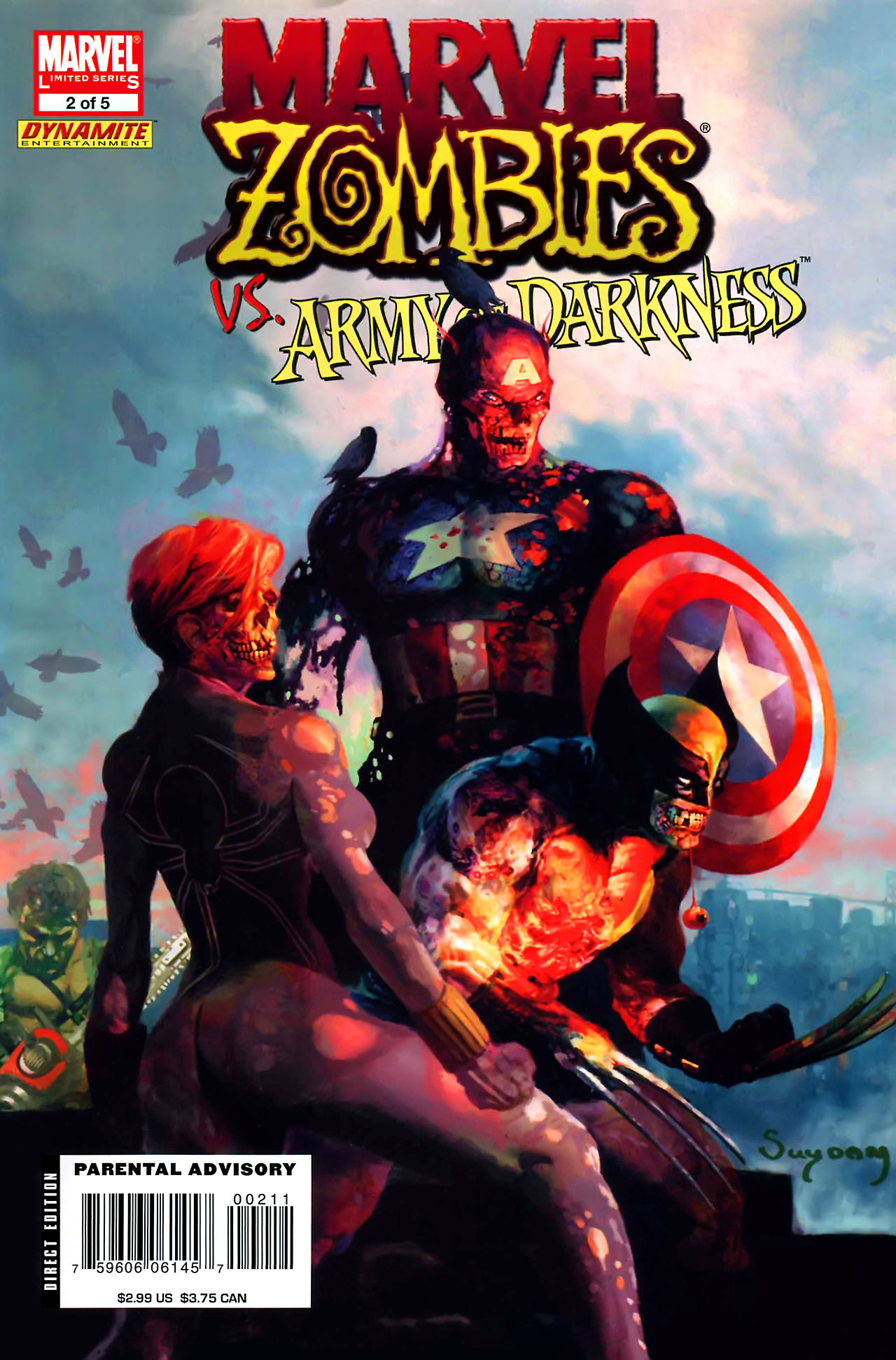 Spider-Man has jumped atop Hawkeye's shoulders with his mouth around the top of his head, threatening everyone to take three steps back from Ashley J. Williams, or he'll eat Hawkeye's brain. The others warn him, telling him they wouldn't do that if they were him, because they taste horrible. He tells them to let Ash go so he can claim him as his food. Power Man points out there's a whole city out there of people to eat, so they let Spider-Man have him. Ash starts to inch away still in his web cocoon, when he is picked up by Luke Cage. He tells Luke he is there to save him and get rid of the deadite infestation. But Luke replies with "You got it all wrong, dude. You can't save us.. And we really don't want saving". Colonel America tells him to cut it out and give Ash to Spider-Man, who was being selfish and didn't want to share.

Spider-Man takes Ash to a roof, where Ash starts hitting him. Spider-Man however points out that he is still alive, so he stops. Ash asks him how he was able to fit his head around Hawkeye's head. Spider-Man replies by telling him he may have dislocated his jaw when he had fallen from the attack of Captain American earlier. After popping his jaw back in place and disgusting Ash, they look out into the city and see all the suffering of people. Black Widow had been eating a poodle, and after seeing this Ash made a comment about a granny having made it the wrong day to walk her dog. This reminded Spider-Man of Aunt May and Mary Jane, so he left Ash on top of the roof to check on them. After Spider-Man had left the Punisher came up behind Ash.

The Punisher and Ash see Thunderball trapped against the wall fending off zombies with his giant ball. Frank tells Ash to keep giving him ammo, because he was going to wipe them all out, including Thunderball. He starts his assault and runs out of ammo, he calls out to Ash, who has left him to fend for his own. Out of ammo the zombies crowd around the Punisher and kill him.

As Ash is running through the streets he sees Dazzler being attacked to a zombified version of Winter Soldier. He stops in his tracks and shoots the back of his head with a newly acquired "boomstick" from what he had stolen from the Punisher. After introductions between Ash and Dazzler, and Ash checking her out, he tells her this is all from the Necronomicon. She has the idea to head to the one person who knows dark magic, and would have any knowledge of the book..Doctor Strange.

They head to his house and see a shadow in the window, making them suspect someone is there. Ash is then grabbed by two hands wearing red gloves without Dazzlers noticing. She does however notice when he doesn't reply, and looks back only to see a zombified Howard the Duck and Ash next to the street sign, with Ash laying on the ground and missing the back of his head.

Retrieved from "https://heykidscomics.fandom.com/wiki/Marvel_Zombies_Vs._Army_of_Darkness_Vol_1_2?oldid=1445978"
Community content is available under CC-BY-SA unless otherwise noted.