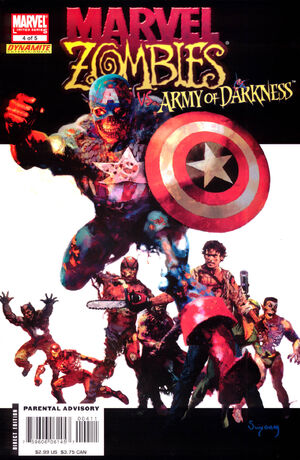 Appearing in "The Book of Dooms"Edit

Synopsis for "The Book of Dooms"Edit

The infection is explained to have been containable in the early hours of infection. However, you see the Scarlet Witch being attacked by zombie Black Cat. Quicksilver then rescues Scarlet Witch, but she is Mystique in disguise. She infects Quicksilver, who then spreads the infection to Britain, Russia, Japan, and the Savage Land.

The story quickly jumps into Latveria, inside Dr. Doom's castle. Dr. Doom has Ash by the throat, threatening to kill him if he made fun of him again. They plead to Doom to let them obtain the Necronomicon and undo the zombie plague, but Dr. Doom shirks them off and tells them that the infection isn't supernatural, but extraterrestrial. Doom then attacks and defeats Goliath using missiles that are embedded into his eye and chest. Doom then carts off Ash to a cell with the other Latverian survivors. Scarlet Witch then notices that all the survivors are of breeding age, and Dazzler scolds him for it. Doom then explains to Dazzler and Scarlet Witch that heroes are dead, and uses Mr. Fantastic as a prime example.

A few moments later, Ash is seen in the room with the other survivors. Scarlet Witch then appears and helps Ash escape. However, they are attacked by a Doombot. Scarlet Witch deactivates it, and Ash takes its armor for a Dr. Doom disguise. This works, as the other Doombots let Ash into the library and leave him alone. He finds the Necronomicon, which then tells Ash that the infection isn't supernatural, but extraterrestrial (mirroring what Doom told Ash earlier). Ash then leaves the library, distraught. However, upon leaving, Ash encounters the Enchantress in a holding cell. He then lets her out, as she looks human and explains that Doom feared her power and locked her there. Upon finding Dazzler and Scarlet Witch, they see that the Enchantress isn't human, but is infected and is about to attack Ash.

From Marvel Database, a Wikia wiki.
Retrieved from "https://heykidscomics.fandom.com/wiki/Marvel_Zombies_Vs._Army_of_Darkness_Vol_1_4?oldid=1445980"
Community content is available under CC-BY-SA unless otherwise noted.