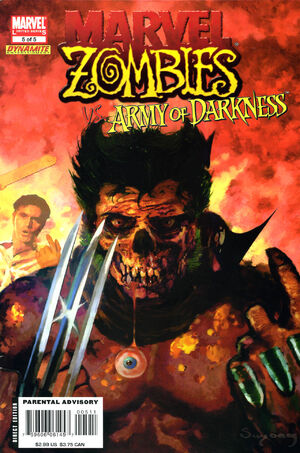 Appearing in "The Stalking Dead"Edit

Synopsis for "The Stalking Dead"Edit

The Enchantress attacks Ash, who is under her spell to make her appear human. Dazzler rescues Ash from the Enchantress by negating the spell. However, Enchantress bites off Dazzler's finger, and infects her. However, before the infection could take hold, Dr. Doom appeared and vaporized Dazzler and Enchantress' heads, killing them both. He then turns to Ash and prepares to send the same energy blast at Ash to kill him. However, Doom is prevented from doing so by both Scarlet Witch and one of his assistants, who tells Doom that the zombies are back and are in greater numbers.

The zombies attack Doom's castle, which then begins to fall. The zombies gain entrance to the castle, and attack Doom. Beast tells Dr. Doom that they rewired Cerebro to find the remaining humans. Beast then also explained to Doom that since Professor Xavier "made the mistake of being too darn delicious," they hired another mind to help, which turns out to be Reed Richards, who envelops Doom and prepares to attack him.

In the midst of the whole attack on Doom, Ash turns to Scarlet Witch and tells her to come with him. However, he sees that she is bitten by Punisher. Ash escapes and returns to the library to find the Necronomicon (again). When he finds the library (after doing a quick change back into his regular clothes), he blackmails the Necronomicon, explaining that since it is written with human blood, that makes it as likely a candidate to be eaten as Ash. The Necronomicon then agrees to help Ash, and raises an army of Deadites, who seek revenge on the zombies for eating them. The zombies are able to fight off the Deadite army, but not without apparently losing Moon Knight. Ash takes the Necronomicon with him.

Ash returns to the room where the survivors are kept and a transdimensional portal is being used to transport the survivors to another world. Ash notes that Dr. Doom looks infected, and Doom acknowledges it, but says that because of his willpower, the infection will be kept away until everyone is through and he can destroy the portal. Ash then enters the portal, but not before ditching the Necronomicon on the castle floor. The zombies then enter the room, see Doom destroy the portal, and attack him. Meanwhile, Wolverine picks up the Necronomicon. The Necronomicon then tells him that it wouldn't be a palatable meal, but Wolverine explains that they wouldn't eat a book and that it was tricked. But then Wolverine explained that they do need toilet paper and tosses the Necronomicon to the Hulk.

Ash is next seen choosing between different universes and realities to settle in. He is given the choice of an alien world, a mesozoic world, a post-apocalyptic world, and a world that looks normal, but Ash says its "too smelly." He then decides upon a final world that he says looks like his (and smells like his). However, upon turning a corner, he sees a group of Marvel Werewolves feasting upon Galactus' remains. The portal shuts behind him before he can go back. The Werewolves notice Ash, who then turn around and chase after him.

Retrieved from "https://heykidscomics.fandom.com/wiki/Marvel_Zombies_Vs._Army_of_Darkness_Vol_1_5?oldid=1445981"
Community content is available under CC-BY-SA unless otherwise noted.