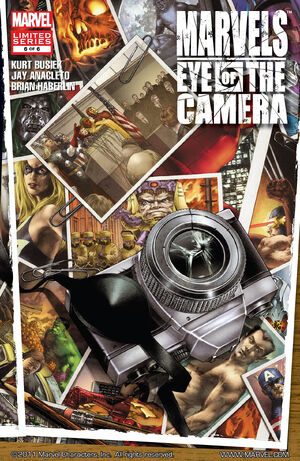 Appearing in "Chapter 6: Closing the Book"Edit

Synopsis for "Chapter 6: Closing the Book"Edit

Phil Sheldon and Maggie watch the X-Men battle on television in Dallas. After Maggie admires the X-Men's bravery, Phil asks her what happened on the night she disappeared. Maggie explains that on that night after Jenny and Bethie went to bed, she watched the news and learned about the mutant-hunting Sentinels. Afraid that her presence might hurt the Sheldon family, she ran away and stowed away on an airplane.

Maggie explains that she eventually found her way to a small village in New Guinea. The indigenous people there thought she was what Americans were supposed to look like, and accepted her into their tribe. Maggie tried to warn her tribe of any dangers from the outside world and they protected her from the Sentinels patrolling their region.

Maggie tells Phil that she came back when she read that he had been diagnosed with lung cancer. Maggie says that she admires Phil for his bravery, but Phil claims that the only brave thing he did was divulge in Sam Kemperer that he was harboring a mutant after he had learned that Maggie had ran away.

Suddenly, Phil learns from the television that his former assistant Marcia Hardesty, is covering the scene in Dallas for NTN News. Phil and Maggie watch news in Manhattan, where X-Factor saves bystanders from the falling debris of the Empire State Building. Phil and Maggie continue watching the news as they hear confirmed reports of the X-Men's death in Dallas.

Outside the hospital room, Phil and Maggie hear Doris Sheldon approaching. Maggie starts to panic, but Phil assures her that it will be alright. Phil introduces Maggie to the rest of his family, who are both surprised and happy to see their old friend. While Maggie them in on her whereabouts during the past few years, Phil turns off the television and watches the happy reunion. Phil realizes his legacy is with his daughters, Maggie, and Marcia. With these last thoughts, Phil's lung cancer finally gets to him and he dies.

At Phil Sheldon's funeral, Doris greets many of Phil's coworkers, who offer their condolences. Bennett Schwed apologizes for pushing Phil to make another book, but Doris says that Phil gained strength from writing that book. Jenny then tells Bennett that she, Bethie, and Maggie will finish the book before she returns to New Guinea. Bennett agrees to let them finish the book when Marcia says she will help them. After Phil's body is buried, Marcia tells Jenny that she was covering a ticker-tape parade honoring X-Factor as heroes. Jenny says that Phil would have liked that.

Retrieved from "https://heykidscomics.fandom.com/wiki/Marvels:_Eye_of_the_Camera_Vol_1_6?oldid=1446100"
Community content is available under CC-BY-SA unless otherwise noted.