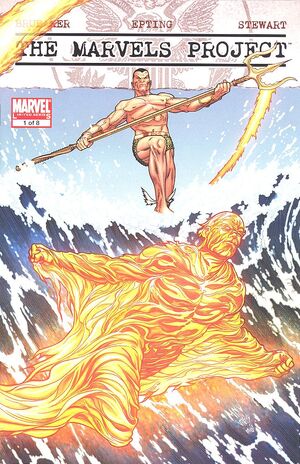 I did what I could that night to protect my adopted home. I thought of old Matt Hawk and the stories he'd told me so many times... How he said it would all begin here in New York City. Was this the beginning? I wondered if he knew that it would begin in flames and destruction. And I wondered, not for the first time...why it seemed he'd known me even better than I knew myself. I had always valued knowledge more than action, but clearly that was changing. Because I had acted almost without thinking. Yes...it seemed clear that morning...that nothing would ever be the same again.

It all begins in New York City in the year 1938 with Dr. Tom Halloway visiting one of his patients who he believes to be senile old man named Matt Hawk. Unknown to Halloway is that Matt Hawk was actually the Two-Gun Kid. Through Tom's visit Hawk tells him of all the heroes he meets in the future (The heroes include Spider-Man, Hawkeye, Dr. Strange, Nova, the Vision, Daredevil, Spider-Woman, the Hulk, Captain America, Iron Man, the Wasp, Iron Fist, the Thing, Thor, and the remaining members of the Fantastic Four), and how they sent him back to New York where the Marvel heroes all began, when he got "too old" to fight crime anymore. He hopes he'll live long enough to see it. The next day Halloway returns to see Hawk again only to be told he passed away in his sleep. After looking at the body a nurse hands him a small wooden box and tells him that Hawk wanted to give him this but had a feeling he wouldn't be waking up again. Tom returns home and opens the box and inside are the Two-Gun Kid's mask and guns. Halloway realizes that the man was his childhood idol, and also inside the box he finds a note saying "From one hero to another."

Retrieved from "https://heykidscomics.fandom.com/wiki/Marvels_Project_Vol_1_1?oldid=1446082"
Community content is available under CC-BY-SA unless otherwise noted.