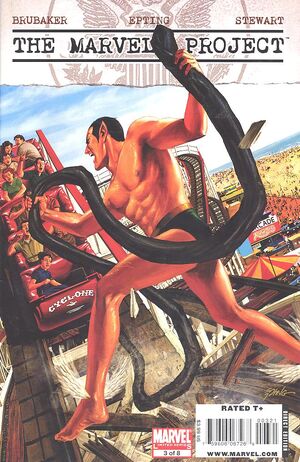 The centerpiece of Marvel's 70th anniversary celebration turns a deadly corner, as Nazi spies infiltrate the secret US government's Super-Soldier Experiment... and while the Torch learns what it means to be both human and a hero, Prince Namor arrives in New York looking for nothing more than vengeance! Things really heat up this issue as award-winning creators Ed Brubaker and Steve Epting bring you the definitive in-continuity origin of Marvel

Retrieved from "https://heykidscomics.fandom.com/wiki/Marvels_Project_Vol_1_3?oldid=1656722"
Community content is available under CC-BY-SA unless otherwise noted.